There’s a quaint late 19th century town not far from my home. I’ve inspected a lot of the old homes there and some really cool old shops and manufacturing buildings. My wife loves driving through it and seeing the really well preserved historic buildings. It’s quite apparent that the folks there really care about maintaining the character of their town.

The original part of the town was laid out on the south slope of a ridge and ends at a creek. At the north edge of the town, near the top of the ridge, there is an old house that I often drive by. It must have been an incredible view of the whole town before the trees came in and matured. I have an 1894 “Bird’s Eye View” map of the town. The kind where each building is drawn individually. I’m pretty sure it shows the house. The only other buildings around this home look to be agricultural buildings and there is much open and clear land. This house might have been a small family farm and is now surrounded by several later homes on lots probably sold off as small farms became unprofitable. 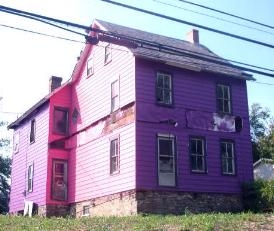 For a long time it appeared that the home wasn’t being properly cared for. It’s unfortunate and sad but it’s likely that the folks living in the home were getting “up there” and had limited ability and funds to care for the old home. I was really hoping some young, old-house friendly couple would find this property on the market soon, at a bargain price, so they could invest in some serious old house rescu-vation. I used to regularly exit the town by driving up that ridge and always looked to see if there had been any changes.

I hadn’t been by there for a very long time. When I happened up that road again, I forgot to look for the old house, but it jumped out at me anyway. IT WAS TWO-TONE PINK AND PURPLE. Not the hues of fancy Victorian homes, but the brightest, most obnoxious, see-it-through-the-fog-at-midnight colors ever produced in house paint. 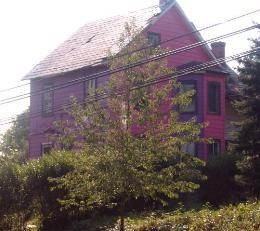 Soon after, the local papers and TV news filled me in on the details. An investor bought the home and applied to demolish it and build 2 homes on the lot. The town council denied it, citing the narrow lot and impervious surfaces issues. The investor then applied to build a twin home but it was also denied. Instead of investing in the restoration of an old house, he is protesting the rulings that cut his maximum profit potential.

It was a gamble and he lost. Now he punishes the neighbors and angers the surrounding community. I guess it wouldn’t matter to a full-time investor from outside the area. But he’s not. He’s a local real estate broker.

You’d think a smart business man, who could benefit from positive publicity, would involve himself in something that makes the community better. Not this one. He boasts to reporters that he’s going to paint on yellow polka dots, maybe even a horses rear end, illuminate it at night and maybe even bring in live turkeys. Is this a person anyone would want representing them in a transaction involving hundreds of thousands of dollars?