Old House History: Did You Know?

Currently active on the MyFixitUpLife reading list is the inimitable Bill Bryson’s At Home, A Short History of Private Life. To call the 150 or so pages of the volume I’ve read thusfar enthralling would be putting it mildly. 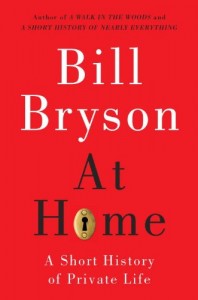 Much like other recent work by Bryson (he’s a FixitUp favorite author) it is a dense but eminently readable history of just about everything in the house, from how it’s built to why we use salt and pepper.

From the introduction: “Houses are amazingly complex repositories. What I found, to my great surprise, is that whatever happens in the world–whatever is discovered or created or bitterly fought over–eventually ends up, in one way or another, in your house. Wars, famines, the Industrial Revolution, the Enlightenment–they are all there in your sofas and chests of drawers…in the paint on your walls and the water in your pipes. So the history of household life isn’t just a history of beds and sofas and kitchen stoves…but of scurvy and guano and the Eiffel Tower and…just about everything else that has ever happened. Houses aren’t refuges from history. They are where history ends up.”

My world view is already changed and I’d be happy if the book ended there (page 5), but it rollicks through Romans, the Irish Potato Famine (surprise: there was plenty of food), to Chippendale furniture to–and this is the punchline here–one of the main reasons we have “rooms,” like the one you’re presumably in right now. Look around.

In a brief preamble that outlines fires in London (1212, 1666), Boston (1653-1834), and the one reputedly ignited by Mrs. Patrick O’Leary’s careless cow in Chicago (1871) it is made abundantly clear that back then, like now, fire is a concern. “Where houses were packed together, as in European cities, there wasn’t a great deal anyone could do [about fire], though housebuilders did come up with one useful remedy. Originally, the joists in English terraced houses ran from side to side and sat on partition walls between the houses. This essentially created a linear run of joists along the block, heightening the risk of fires spreading from house to house. So from the Georgian period the joists were run front to back, turning the partition walls into firebreaks. However, running the joists from the front of the house to the back meant they needed supporting walls, which dictated room sizes, which in turn determined how rooms were used and houses lived in.

Did I say fascinating?