I’ve written many times about the extreme measures preservationists go to while moving old houses to new locations in an effort to save them from demolition. Some of my blog posts have relayed stories about old houses being moved across frozen lakes, down steep hills, even old houses being barged across water and every story seemed to have a happy ending. I’m sure every move encounters small problems as any endeavor that large would almost have to, but I hadn’t read about any complete and total disasters until today. 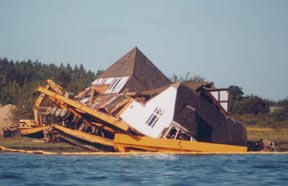 Nickel Bros. House Moving Ltd. has been in business since 1956, and they do a lot of their work in northwestern Washington State around the San Juan Islands and their adjoining counties. I didn’t know who they were at the time, but I wrote about one of the old houses they moved in that area a while back. Due to all  the islands in that part of the state, they have become proficient at moving homes by barge. It sounds like they are a very professional company who have house-moving down to a science.

Unfortunately even with good companies things can sometimes go terribly wrong, and this summer they experienced a total loss as a historical home built in 1937 by an immigrant German architect slid off a barge and into the bay. The 180-ton home evidently shifted as it was about to be unloaded; and when something that large starts to tip, it can be just about impossible to stop. If I’m understanding the article correctly, the financial loss was the moving company’s, as they had purchased the old house in Vancouver to save it from demolition and had a potential customer lined up to purchase it in the new location. I’m sure preservationists were devastated by the loss of the historic old house, but when all the homes Nickel Bros. has saved are taken into consideration, they still have a pretty good track record. 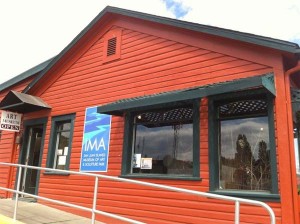 Old House Soon to have New Home-- photo from pnwlocalnews.com

Speaking of old houses Nickel Bros. has saved, they will be moving a home with an interesting past on November 18. The home was built in 1856 and has already been moved a number of times during its long history. It seems to have been put to many different uses everywhere it was located. I find it fascinating that while local historians know just about everything about the home, no one knows where the home was located or what it was used for from 1875 to 1884. It appears to be a local mystery. The move will take place through the local streets, and no barges will be involved–which I’m sure Nickel Bros. is happy about.