Beyond the Handshake: How Old House + Old School = Title Issues

Families that live in rural communities like the one where I live have lived here for generations and have passed down houses that are over a hundred years old. It’s not uncommon for real estate transactions to be done with a handshake and a smile. The house next to me and the house across the street from it are both seller carry-back loans because folks know one another and a lot of the hoops and costs that go along with buying and selling property just seem like more trouble than they’re worth. A quit-claim deed or a deed of trust is all that is really needed here.

I love that living here in a lot of ways is simple. 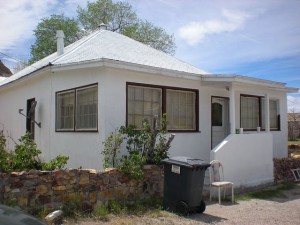 Family homes, such as this one built 1905, sometimes have unexpected issues that can only be discovered with a title search

I am in the process of buying a house that was built in 1905 and has been in my family since the 1950s. The timeline goes like this, best I can tell: Grandpa buys 1.5 lots, Grandma and Grandpa buy house on 1.5 lots next door to Grandpa’s parcels, Grandpa dies, Grandma puts Aunt Ruthie on deed for house and lot with 3 lots, Grandma dies, and Aunt Ruthie agrees to sell me the house. Not an unlikely scenario in any family.

Though we considered having my aunt carry the papers, we both agreed that since financing wasn’t a problem for me, we’d just go that route. And since I was financing, I needed title insurance, which included a title search.

Turns out that Grandpa never put Grandma’s name on those 1.5 lots or recorded the original deed, which means the land wasn’t included in his probate or, subsequently, my grandma’s probate. My aunt had to hire an attorney and, in Nevada, they can do a “set aside,” meaning that some probate issues can be handled while setting aside some tedious administration. And we were only able to do that because Grandma was a fabulous record keeper and had saved all the original documents (on onion paper, to boot).

Instead of a being a homeowner blessed with a quick and easy sale, I am a real-life example of one of the special scenarios real estate schools warn aspiring agents about. And it’s not just my sour luck. 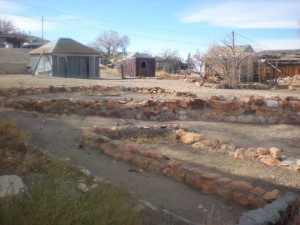 The lots pictured were never recorded in 1950, which created issues 60 years later.

The house across the street from me, where I grew up, is currently being sold and the buyer cannot get a title policy because the stairs (which have been there since the 50s) are on the county’s road. The house has been sold twice since those stairs were built, and one of the owners was the county’s district attorney. How is this possible? Because both were cash transactions and a title search was never done.

In talking to Don Rita Rice at Cow County Title about the issues in Tonopah, she said, “I’m sure it happens other places in other states with rural areas.” According to Don Rita, part of the problem is education and the other part is access to resources, such as a title company. She says she frequently sees problems with deeds and spouses (because Nevada is a community property state).

Her advice? “Never destroy original documents.” She said she’s heard of people throwing mortgage-burning parties, which she said is a very bad idea. Her staff was very surprised when my aunt was able to locate those original documents in my grandma’s papers, “It’s not something we see very often.”

Also, for old homes that are cash sales or seller carry-back loans, a title search is a very good idea–even if you aren’t planning to purchase a title policy. Title companies will search all public records to unearth ownership issues with deeds, IRS and property tax problems, and more. Title policies, explained Don Rita, have premiums that are based on the home’s purchase price. A title search has a flat base rate (Cow County’s is $250) and then additional fees depending on how much work is required.

Don Rita also mentioned that for owner carry-back financing, a title search is an especially good idea if a homeowner thinks a refinance may be in his or her future because the lending agency will require a title policy.

I am a big fan of handshakes, old houses, and rural living. Is it worth a couple of hundred dollars for a title search to have peace of mind? Definitely. I haven’t run into many people who are fans of owning a house–old or not–that they may have problems selling, should they ever decide to sell it.