I’ve written about old house fire safety in the past; actually it has become an annual event when cold weather and the holiday season are on the horizon. However, after a weekend incident that happened at my old house I thought I’d touch on the subject once again. 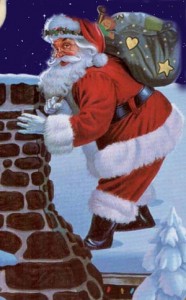 As I’ve discussed in the past, I have an ancient kerosene heater as my primary heat source that I’ve been using every winter since moving in 20 years ago. The heater sits in a room off the kitchen that is supposed to be a dining room, a flue pipe exits from the rear, and after a couple of bends it enters an old brick chimney. My home actually has two brick chimneys, but one is abandoned and the other is used for my heater. The only place the brick is visible is a little bit down in the crawl space and then where it goes up through the attic and out the roof.

I spent a large portion of Saturday cleaning the kerosene heater and getting it ready to be used for the first time this season. I lit it up when I was done and after being sure it was burning correctly–it’s a trial and error operation–I sat back and prepared to feel toasty. After about 10 minutes I went upstairs and being the sharp individual I am, when my bedroom was so full of smoke I couldn’t see my bed, I thought it might be an indication there could be a problem.

Get an Old House Chimney Inspection 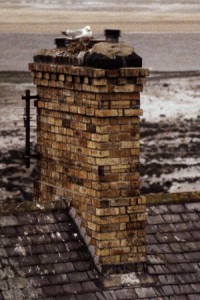 Actually I think I have 2 problems; I believe there is a blockage of some sort in my chimney, and I would imagine that I have some mortar that has come loose from between some of the bricks. The missing mortar is allowing the smoke to enter my bedroom through the drywall. I know the drywall felt very hot in one area where it covers the chimney. Luckily I was home and awake and my home didn’t end up like this old house in Michigan. I will say that I know exactly how this man felt when he realized he might have a chimney fire and I didn’t relax until I felt the chimney cool down.

So there is a chimney inspection company coming out with a video camera to discover where my mortar’s missing and what sort of blockage there might be before I start tearing off sheetrock. The moral of this story is: If you have an old house with brick chimneys that are largely hidden from view, don’t assume that because you’re not burning wood they don’t need to be inspected on a regular basis.