The Whaley House Collected Water in a Cistern photo from sohosandiego.org

When Eric Clapton wrote “Let It Rain” many years ago, I doubt he had old house cisterns in mind. But for many people in the Virginia area who rely on rainwater to supplement their home’s water supply, it has been a primary concern. A lot of the old houses in this part of the country that use a well for their water were built with cisterns to supply most of the water for everything other than drinking.

The home my parents live in, and where I grew up, has a cistern and I recall the weekly task of going out with a measuring stick to determine how much water we had and having to pump well water in on occasion so we could shower and wash clothes. Most of the guttering on the home emptied into the cistern and it also collected ground water, but when we had a dry summer water had to be rationed carefully. I remember many a shower being cut short by my father knocking on the bathroom door and informing me I’d used enough water.

The old house I’ve lived in the past twenty years is on town water and I’d pretty much forgotten about the old cistern days until my mother mentioned the other day that they were desperate for water. I knew we’d had a dry summer as my grass turned brown in July, but I don’t raise crops and I’d forgotten about relying on cisterns. So I didn’t give the drought much thought until my mother said they were having to wash clothes at my sister’s home. It’s rained here the last couple of days; four to six inches of rain that’s being welcomed into many dry cisterns. 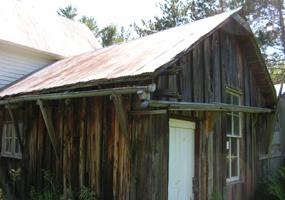 Bring on the Rain photo from nps.gov

Cisterns were a big part of the water supply in many old houses as a post on OldHouseWeb.com’s blog details. The old Treat Farmhouse at Sleeping Bear Dunes National Park had an intricate system of collecting rainwater for its cistern due to sand constantly clogging its well next to Lake Michigan; and the cistern that supplied water for the historic Whaley House in Old Town San Diego is currently being excavated to show visitors how old houses collected water.

Many people who visit Nevada forget that the area has a rich history and abounds with historic homes and old towns. A local old house enthusiast alerted me that the Historic Reno Preservation Society is having their annual Harvest of Homes this Saturday, October 2. It sounds like an event worth attending if you’re in the area and you might want to make a weekend of it by touring some of the historic towns nearby like Virginia City, Goldfield, and Eureka.