I grew up in a small blue collar town north of Pittsburgh.  One of my grandfathers worked in a local steel mill and the other owned a hardware store on Main Street.  My father’s parents had a huge country home built in 1942 that was the talk of the small town.  The hardware business had evidently been good over the years and many of the latest innovations in the housing industry were included in the home.  My mother’s parents lived in an old American Four Square home right in town that had been built during the early 1900s. 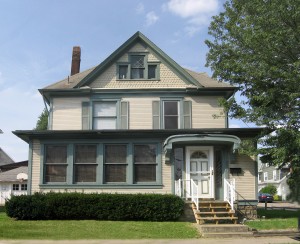 Fond memories from childhood in Pa.

I have fond memories of both houses, but especially of the old house in town as I spent a lot of time there during my early childhood.  I can still remember waking up to the smell of pancakes on Sundays and the sound of radiators knocking as the house warmed up before we got out of bed on a cold winter morning.  I remember fried egg sandwiches made with homemade bread at lunch and watching the snow fall at night as it passed through the glow of the street lights.

One of my biggest regrets in life will always be not moving back to that town and buying that old house when I had the opportunity many years ago.  That’s why I’m very envious of the lady in Queenbury, N.Y. who managed to purchase the old house her grandparents once owned.  The home was originally built in 1854 on a local lake and her grandparents bought it around 1924. She has the same childhood memories that most children have of visiting their grandparents’ home, but instead of fading away with time…her memories are refreshed everyday while she creates more. 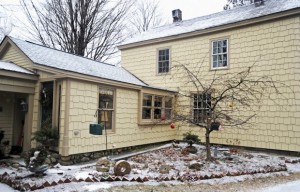 Childhood memories in N.Y.--photo from bloximages.chicago2.vip.townnews.com

I wrote previously about a new trend that seems to be happening with the preservation of old houses.  I can only attribute it to the current state of the economy and developers’ concerns with having good publicity for their projects.  A historic old house in Bel Air, Md. was built in 1791and has ties that go all the way back to men who fought in the Revolutionary War and the War of 1812. Unfortunately the home sits on property that has been purchased with the intention of building townhomes for senior living.

The developer offered $50,000 toward the relocation of the historic home, but hasn’t had any takers. Understanding the battle he could be facing if he seeks permission to demolish the home, he has instead decided to look at incorporating the old house into his development as a community center.  It’s a very similar scenerio to the senior condos and the old house in Mountain View, Ca. and hopefully will continue as a preservation trend for the future.