I find the many outbuildings old houses collect over the years to be fascinating. I can’t speak for other states, but Virginia’s old houses often have outbuildings of all shapes and sizes scattered around their properties.  It doesn’t take much deductive reasoning to figure out what some were built for, but others often remain a total mystery. 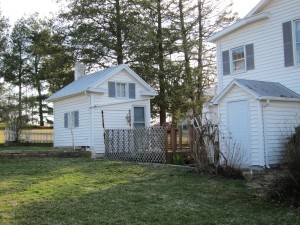 When we first moved to Virgina in the mid ’60s, the old farmhouse my parents purchased had a number of sheds and a barn on the property. One was an old outhouse that was still in pretty good condition and even had a small single pane window that remained intact. An unfortunate incident with a BB gun soon changed that.

The medium sized barn’s first floor became a storage room and inside parking for our tractor with a little renovation work.  The second floor was used to store hay for the horses to eat during the winter.  I have fond memories of stacking hay bales on hot August afternoons while avoiding wasp nests in the rafters and stepping over the occasional snake we disturbed.

A small outbuilding was renovated and still serves as a tool shed today.  The property had a large one story shed that was open all along the front for storing farm equipment at some point in time.  We closed it in and with some interior changes had a nice stable. My father had very cheap labor at his disposal in those days.

The small town I live in now has old outbuildings everywhere.  Some have been restored along with the old houses they’re next to, but others appear as if they haven’t been touched in 100 years.  There are two story buildings that may have housed livestock at one time, but others might have been used as businesses of some sort.  A few months ago I wrote about an outbuilding that was once a cobbler’s shop. 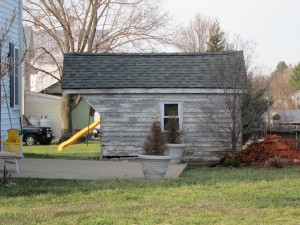 There is one small shed design that’s very common, but no one seems to know anything about its unique shape.  The shed has a roof overhang on the front that extends out about two feet and is supported on each side.  I would say that maybe 30 to 40 percent of the old houses in town have one of these sheds very close to their rear door.  There were probably a lot more built that didn’t stand the test of time. I don’t know if there was once a local shed builder with a popular design and a lot of business or the overhang served a specific purpose.

Some states are taking measures to save their old barns just as they are their old houses.  The University of Vermont has a very good article on the various types of historical barns in the state and tips for preserving them.  There are even people who specialize in saving old barns.