English singer-songwriter Imogen Heap traveled the world to write the songs for her newly released album, “Ellipse,” but she returned to her family’s 200-year-old house in Sussex to record them, according to an Aug. 28 article in the Wall Street Journal.

“As the scaffolding was around the house, I started to hear the floorboards, the radiators. I was fresh to those sounds and I wanted to incorporate them into the album,” she told the newspaper. “I took a binaural microphone and walked around the house for hours. The boiler, the washing machine, my fingernails on the banister—I recorded all of it. I brought the house into the music.” And unsurprisingly, the name of the album was also inspired by the home, which Heap said has an “elliptical” interior.

She’s not the first recording artist to look to an old house for inspiration and refuge. Old houses are often a haven for creative types, who perhaps see a bit of themselves in a building’s eccentricities.

Has a scary movie ever been made that doesn’t star a creepy old mansion? What would folk art be without farmhouses? From Frank Lloyd Wright’s Fallingwater to Thomas Jefferson’s Monticello, historic homes are often the subject of photographs and paintings; their sounds, unique characters and stories are written and sung about.

And as Heap demonstrated, just being inside an old space can lend a fresh perspective and ignite your imagination.

An Old House as Art Exhibit

In Providence, Mass., through Oct. 2, the Nightingale-Brown House, a National Historic Landmark built in 1792 (also home to John Nicholas Brown Center for Public Humanities and Cultural Heritage at Brown University),  has been incorporated into the “Art+History” exhibition featuring photographer Carla Herrera-Prats and sculptor Jill Slosburg-Ackerman. 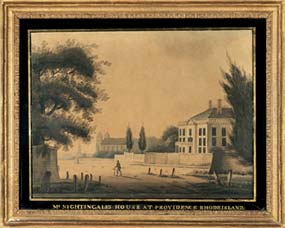 The exhibit showcasing historic homes tells “the complex stories of their inhabitants through images and objects, the currency of visual artists,” according to an Aug. 19 story in the Boston Globe.

It’s amazing to think of the ways history lives within the walls of historic architecture. The buildings themselves tell stories. But then there are also the lives of residents.

In the case of the Nightingale-Brown House, its story involves five generations of the Brown family, who were involved in or touched by slavery, imperialism and trade. I wonder, if a singer were to record an album there, what would it sound like?