Home / Old House Blog / Old Houses: Beauty in the Eyes of the Beholder

Old Houses: Beauty in the Eyes of the Beholder

I didn’t get very far on the exterior painting of my old house. I had great intentions when I got started in September. Now we’re having an unseasonably cold December that prevents exterior painting, and I’m more concerned at this point with getting my chimney fixed.

I finally heard from the chimney inspector after more than a week, and he isn’t interested in doing an inspection if I don’t want a liner. Parts are no longer available for my heating stove, so if it stopped working in January, I’d have a nice lined chimney that I have absolutely no use for. That pellet stove and the federal tax credit are looking better all the time, especially on these 18-degree evenings. 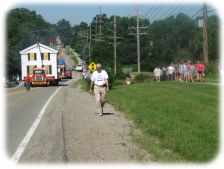 Preservation Bloomfield in Bloomfield, Michigan, recently had their third annual Gingerbread House auction. The decorated houses are used to raise funds for preservation in the Bloomfield area and more specifically for the restoration of the Barton Farmhouse. The historically significant old house dates to the 1820s and was purchased by the organization for a dollar back in 2007. The home was moved to a farm and is being restored to its original condition.

The preservation organization has raised over $400,000 in restoration funds through contributions and its fund raising activities. One of the advantages Preservation Bloomfield seems to have is the entire community has recognized the importance of saving the home and has supported the organization’s efforts. The same situation doesn’t seem to exist in Lake Elmo, Minnesota. 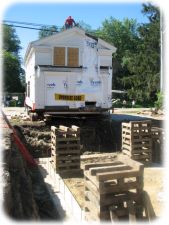 Linda Hardy and her husband saved a 130-year-old, Lake Elmo, Minnesota house in 2006 by purchasing it and moving the structure to a vacant lot next to their existing home. The plan was to restore the old house so they could eventually move into it, and they were applauded for their preservation efforts by the community. Unfortunately things didn’t go according to plans and while the couple was spending $200,000 to restore the home, Mr. Hardy fell ill and died. Now Linda Hardy is destitute, the house has been condemned, and neighbors are encouraging the city to tear it down. It sounds like the old house needs a lot of work before it’s livable; work that Linda Hardy isn’t capable of doing herself and doesn’t have the means to pay for.

As I sit here during the Christmas season I find it curious that we have two scenarios being played out not that far from each other. In one community people are buying Gingerbread houses to help the restoration of a home they consider to be historically significant. In another community people are encouraging the demolition of a historic old house and a lady’s dreams to preserve their property values–instead of pitching in and giving her a helping hand.