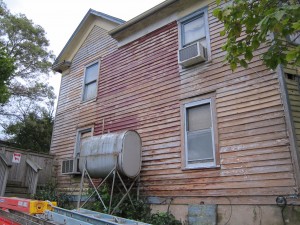 The Joy of Paint Prep!

Exterior paint prep on an old house is labor intensive but allows time for contemplation, and I find myself thinking about helping my father as I was growing up. My father was an accountant, but he believed–and still believes–in hard work and the value of education. I don’t recall anyone other than him and me ever working on our family’s old house. We completely restored it and then doubled the original size with an addition while I was in high school. The entire project was all done around work and school schedules.

Everything my father didn’t know about construction work he read about and taught himself as we proceeded. Forty years later everything is still working. It was a lot of sweat and hard work–and as a high school kid there were many days when I wished I was doing something else–but I still remember the sense of satisfaction as we surveyed our work at the end of each day. I guess some of that rubbed off, as I couldn’t imagine having someone else work on my old house now. 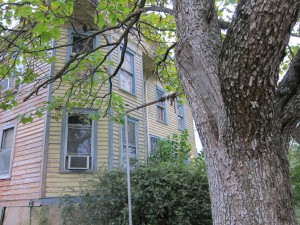 I know if everyone thought that way there would be even more contractors out of work than there already are. I watched my neighbor get a new roof installed several weeks ago and the crew rolled in and had the job done in a few days–a job that would probably take me a couple of weeks working during my spare time. The same neighbor walked over this weekend as I was sanding my siding and asked when I had the paint crew coming in. When I told him the paint crew was me, I think he thought I was joking at first and then he seemed to feel sorry for me and all the work I was facing. What he’ll probably never understand is the sense of satisfaction I feel looking at what I’ve accomplished each day and having that time to think about fathers and sons.

Barring an extension, December 31 is the last day to qualify for some of the federal energy tax credits that are in effect. The tax credits allow a rebate of 30 percent–up to a maximum of $1,500–for some of the costs involved with making your home more energy efficient. There’s still time to install new doors or windows in your old house or upgrade your HVAC system. Winter’s not far away, so it might be a great time to beef up the insulation in your old house. Not all upgrades qualify for the energy tax credits; check on the Energy Star website or with your tax accountant to verify which do.