Back when I was learning about old window repair and what it took to make those antique beauties look and work like new again, I was confronted not only with layers and layers of paint, but also with hardware that was starting to rust and stick to a point of being unusable. In some cases I could remove the hardware, thoroughly clean it and that would be good enough. But there were a few old windows that needed new hardware–or at least hardware that was new to the house.

I started with antique shops and salvage yards. I found several pieces of hardware that looked as though they might fit, but when I compared the measurements I realized they were just the slightest bit off. That’s a problem with old windows. They were often built right into the house, and even a matching set can have slightly different dimensions. Finding a “standard” dimension in old windows is almost impossible, and that includes the strips of wood where the hardware connects. 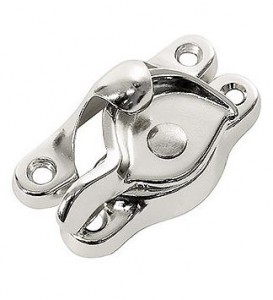 I wanted a complete set that matched what I already had in the house, and I soon realized that looking at antique shops just wasn’t going to give me what I wanted. So I began looking at more modern versions that were meant to fit in with the look of an old house. But no matter what kind of finish I liked or what kind of hardware looked good, none of it looked as good as the old, beaten and worn nickel hardware that was already in place on most of the windows.

I finally went with a few antique reproductions of very thin sash locks, as well as matching sash handles. For the rest of the windows I decided that with all the quirks my old house has, why not let it be even quirkier? I chose mismatched sash locks, each of the thinnest styles I could find, to adorn the other ancient windows in the house. Nothing at all matched, but that’s okay–I wasn’t exactly going for historic accuracy on every detail.

Then came the task of actually installing the hardware. Just as each window is unique, so is the spacing of the screws (and in one case, nails!) of the antique hardware. Fortunately, most of the new hardware was slightly longer than the old, so the previous holes were easily covered up. For those that weren’t, I created little wood plugs and inserted them into the holes, painted them over for a uniform look, and then drilled new holes for the new hardware.

For a few of the windows, there was another problem. The sashes were too close together to get a good fit with the sash lock hardware. Thankfully, those windows were on the second floor and accessible only by a suicidally steep roof, and the were rarely opened anyway. The solution was a small hinge lock that might be unconventional for windows, but worked wonders for mine.

Next step? Finding the perfect storm and screen windows that suited my old house. And I thought finding the right hardware was difficult!