One Haunted House, Batteries Not Included

Another entry in our Ghost Stories Blog Contest, this one comes from forum member Mrs._d.

Our house could be called “haunted”, but I prefer to call our house “shared by others”. We’ve had so many unexplained events, that I started a journal 3 years ago as we began our old house restoration. Each time we begin new projects–there seems to be a flurrish of activity and also when we have guests staying over.

We bought our house in April 2007, a 13-room 1893 Queen Anne Victorian, a house that sat vacant for almost 40 years. The first owner/builder John Olson Wrolstad had 12 children–they lived in the house for 14 years until his death at age 69. Eight of his children lived long enough to appear in this family portrait taken in 1893, and yet only four lived past their 25th birthday. 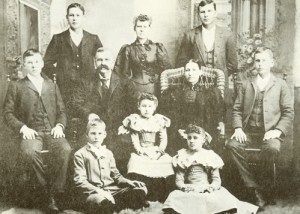 Most of the “unexplained things” going on in our house–seem to be children’s prank-like events.

I made a chocolate cake–Jon’s favorite. I put it in the oven and forgot to set the timer. When I checked on it, I tested the center of the cake to see if it was done. It needed about 5 more minutes baking time. Nonetheless, testing it like that left a finger size dimple. When the cake was done, I put it on the cooling rack and continued with restoration work upstairs.

An hour later I decided to go downstairs and frost the cake. I stood there looking at that cake in disbelief. In all 4 corners of the cake was a thumb print, about the depth of the finger size dimple I left when I tested the cake, but just larger–like a thumb print. For a moment I thought about getting the camera and photographing the cake. Then I decided this is stupid. I frosted the cake and continued my chores.

Later on I was still thinking about the cake, and when DH Jon came home I asked him about it. I said, did you touch the cake? He looked at me like I was nuts and said, NO–I didn’t touch your cake. Then I told him about the thumb prints. Jon just looked at me like, I don’t deal with the ghosts, they are your responsibility.

Crashes, and Battery Operated Things
Some of events are quiet, and some are loud. We hear crashes often, footsteps in the hallway dropping ring of keys on the floor, and the sound of children (light weight feet) running down the hallway and down the stairs–waking us up in the middle of the night and the same sound repeating again about an hour later. Here are two events from my journal about battery operated items in our house.

My journal - March 23, 2009:
Yesterday Jon and I were standing in the upstairs bathroom discussing new location of the pedestal sink, clawfoot tub, and toilet. Suddenly a big crash in the east bedroom (adjacent to the new bathroom). It stopped our conversation. We both smiled, then continued on with the discussion.

Later Jon left to go to the neighbors to repair a hydraulic line on some lift equipment. I was upstairs hand sanding 3/4″ beadboard. I accidently nicked my finger and went into the downstairs bathroom to get a bandaid. I heard a buzzing sound coming from the bathroom linen closet. What????????? I opened the closet door. It was our pedi-paw pet groomer. It was buzzing in a box in the closet–we hadn’t used it for weeks. I removed the buzzing box from the closet, and with my newly bandaged finger I had quite a time getting the package tongue flap out of the box, so I could open it.

The pedi-paw pet groomer wand is battery operated (shaped like a flashlight) and has a big toggle switch (on/off). When I switched it off I noticed it made a loud click sound. I would say it took about as much finger pressure to click the toggle switch as it would for a person to snap their fingers. I just stood there is disbelief and clicked it on, and then off again. I shook it and shook it to try to make it turn itself on again. Nothing. This is really crazy stuff happening here. Just enough mischief here and there to let us know our ghosties plan to share this house with us.

My Journal - June 25, 2009
More ghost activity this morning. The clock by my bed said 5:03 when I got up and went downstairs to find my nasal spray. I entered the downstairs bathroom and heard a thunderous buzzing sound. We have a new air conditoner we installed this week. My goodness, the only thing running was the new a/c on the other side of the house upstairs–so what could it be? I went back upstairs to tell Jon about the loud buzzing sound. He said, maybe it is the hot water heater in the basement. He went to the basement, but nothing.

We stood in the downstairs bathroom, and Jon said, “it sure sounds like its coming from the closet.” We opened the closet and the sound got louder. I moved out of the way immediately, and Jon took a look. Next to the metal exhaust pipe (hidden inside the closet), is a Neutrogena MicroDermabrasion System–it is a handheld, battery operated facial exfoliator. I bought it a couple of years ago when we lived at our old house. I used it once–maybe back in 2005 or 2006.

The handheld battery operated exfloliator sits in a plastic molded tray, inside a box. And, for whatever reason decided to click on all by itself this morning and was vibrating up against the metal exhaust pipe. This is hilarious. We are trying just to laugh it off. But I tell you, our ghost sure likes battery operated things.

Well I could go on and on. There are lots more events like this one. Some a bit scarier. We just take one day at a time here. Our whole-house restoration is about 80% complete.