By any other standard the door to my son’s room is broken. 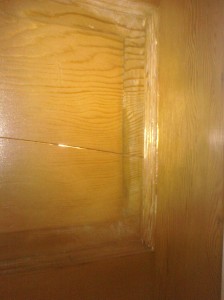 Not only is one of the five horizontal raised panels in the century old Douglas fir door is cracked along the grain, but two are. If I installed a new door like this on a remodeling project I’d be called back in a heartbeat.

But once you get to be a hundred, the rules change. And so do baseline perceptions of what a “nice” house is once you live in one.

And just to set a baseline, to me, drafty, leaky, and otherwise decaying old houses aren’t charming to me. They might be pre-charming as it shows the home improvement adventure lying ahead–or even post-charming–but being cold in my living room and watching paint peel holds no appeal (heh…appeal) for me.

But aged imperfection, somehow, does. Even though I had to strip the million layers of paint off the door before hanging it to expose this succulent grain, replace the hardware, re-build the jamb and re-trim it, the door works. It swings nice and plumb, closes softly and does everything new doors do. 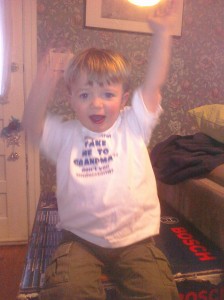 Jack getting ready for a tool review.

See, the other thing about this door is what’s behind it: my boy’s crib. I often use that crack to peer through (easier in the winter when the air is dryer and the crack opens a bit more.) I can see him if he’s standing up which means–if I can’t hear it already–nap or night time is over. I can also spy on his cuteness if he’s standing at the rail of his crib and (I’m not kidding) giving one of his “speeches.”

You could never design a crack like this. It has to happen organically, over time.

It is, I suppose, kind of like the way many old houses–and the towns they live in for that matter–evolve. Materials wear, additions are built-on, porches refurbished, stairs re-directed to fit in a new powder room… whatever the case may be. And as the house or town is lived in and adapted to, it creates a way of life as much as a way of life is created for it.

A generation from now–another one for this house–I honestly don’t expect that my son will peer through that door at his own children however cute a story that might seem. However, someone might. They’ll walk where we walked, repair what wears out, change what they need to for their lives.

I just hope they don’t fix that door. It’s not broken.