Pay attention to your old house

I learned many hard lessons during that first year of living in my old house.

How many times have you seen beautiful, thick and luscious ivy on the side of a stately home? The greenery always makes the home even more charming. It reminds us of English countrysides, expansive lawns and old brick that has seen a good century or two.

That’s what I thought as I enjoyed the look of ivy and vines on the low brick walls surrounding my house. It was also climbing a trellis near the garage. In the back of the house, it was slowly climbing up the wide brick chimney base that led from the ancient fireplace. It was gorgeous. It was perfect. It made my house look even more like a fairy tale.

How ivy and vines can be a bad thing 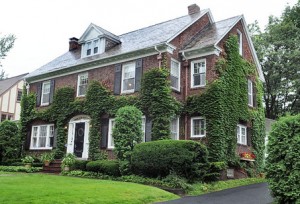 But shortly after hiring a landscaper to make my lawn look like that English countryside, he pointed to the ivy and said, “We’ve got a problem.”

In the thrill of seeing such lovely ivy on my house, I made the classic mistake of not thinking about what was happening underneath it. That would be the tendrils creeping into every crack they could find in the brick, shimmying under the neighboring clapboard, and wrecking havoc underneath the lovely green blanket.

It was a fortunate lesson learned. There wasn’t much damage, but it was still an unexpected hit on my pocketbook–and my pride. But if I had let the beauty of the ivy continue to overshadow what was happening underneath, there would have been serious consequences down the road. The takeaway lesson: always pay attention to your old house, even to things that seem benign.

How to protect your old house

Here are a few other things I have learned to notice along the way:

The longer you live in your old house, the more familiar with its quirks you will become. Don’t attribute anything to the simple age of your home–it could be the first signs of a serious situation, and that means it needs to be checked out now. The longer a problem is allowed to fester, the more expensive it can get.