Never heard of a pent roof? That’s okay, my spell check doesn’t even recognize it.  They were rather common on the early homes around my area.  Now they’re almost extinct.

A pent roof is a small single-slope roof that is attached to a house just above the first floor’s windows and doors.  Although some describe it as a small porch roof, it’s self supporting, without posts, columns or brackets.  As an architectural detail, it creates a visual division between the first and second floor but it also has a purpose.  It sheds water away from the home’s foundation and main level windows and doors (the main roof dumps a lot of water when there’s no gutters).  It also shades windows from direct sun, like a modern awning. 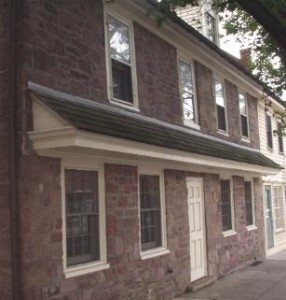 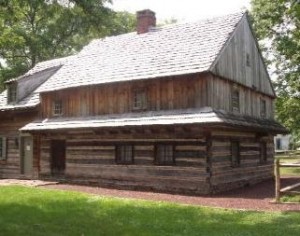 Most common on homes built between 1700 and 1830, they were often on just the facade, but some early homes could have them wrapped all the way around.  Some were very basic and simple, just containing the necessary structural materials.  On more formal and styled homes, there could be ornate mouldings, often imitating the details on the main roof eaves.

Most original pent roofs are long gone and current owners of homes that originally sported one never knew of their presence.  If you’re specifically looking for evidence, there’s often some clues that one was once there.  On masonry homes, there’s often filled-in “pockets” from where the joists of the pent roof once protruded out from the wall.  Stone and brick homes might also have a “drip course” – a protruding horizontal line of masonry that would be where the top of the roof attached to the house.  There might also be a line still visible, where a flashing from the top of the pent roof entered the wall. 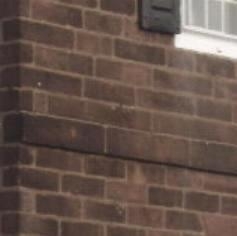 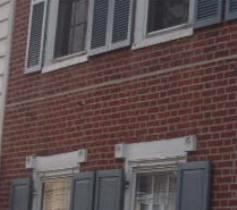 Stucco coated homes might show a patched area where the pent roof used to be.  Many timber frame and log homes had a pent roof as well, but it is often harder to see the evidence on the surface.

Pent roofs began to disappear as new popular architectural styles pushed them off the building. The first change to the early homes was that windows became larger, not leaving much room between the first and second level windows.  Large, fancy pediments over main entrances on Georgian and Federal style homes would be obscured by a pent roof.  By the time the Revivals and Victorian styles emerged, the pent roof was history.  Later styles also included porches as part of the original design.  Homes that originally had pent roofs often lost them when a porch was added.