Preparing historical buildings for an earthquake

When the August 2011 earthquake caught the upper eastern seaboard by surprise, I was on the second floor of a 1836 home just outside of Philadelphia. I had just walked out of my kitchen into the living room when it seemed the floor tilted, then settled back down, then tilted again.

I leaned against the wall, confused. I thought it was a dizzy spell. When I heard the rattling of the glass in the window frames, I adjusted my thinking: this was the result of construction on the street below. But when the rattling got stronger, the tilt came again and the power suddenly flickered away, I realized it was an earthquake. 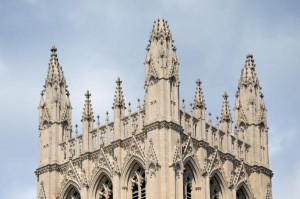 Spires on the National Cathedral tumbled during the earthquake. Image credit: UPI.com

Shaking up an old house

I grew up in an area around the New Madrid fault zone, so I knew what an earthquake felt like. But I had never felt an earthquake in a truly old house, and it was an interesting experience. Rather than the shaking I had always felt in the past, the home gently swayed. Rather than the usual groaning and creaking of wood, there was a deep grinding sound that must have come from the thick brick and mortar. Rather than cracking at the corners like I had known modern windows to do, the glass in the ancient windows, some quite fragile, stood up to the quake.

Soon after the earthquake was over, everyone from newscasters to neighbors began to talk about what could happen to the cherished historical buildings in the area if a really big quake hit. Unfortunately, a true seismic retrofit could destroy or disturb the very period details that make a historic building so–well, historic. The key is to find a happy medium between modern seismic protection and the historical integrity of the building.

Time for a seismic retrofit?

Since every old building is unique, calling in a contractor who specializes in seismic retrofit is the best course of action. Since an earthquake can strike at any time, it is a good idea to get the ball rolling on what needs to be done. But while you wait for the contractor, there are a few things you can do to help ensure your home is as safe as possible if the earth starts to rattle and roll:

Finally, if you are not in a place that gets many earthquakes, don’t be fooled by that false sense of security. Many people in the D.C. area, Philadelphia or New York City never expected to feel the shaking of an earthquake, but what was happening was unmistakable. Just when you think it can’t happen, it can–so be prepared.