Preserving an old house: a movement in 3 parts

Although I haven’t posted in several weeks, I was happy to discover that the preservation of old houses has continued in my absence. I read an interesting article today about an old house being saved by a young couple in a rural part of eastern Texas and the unique method being used to move the home. 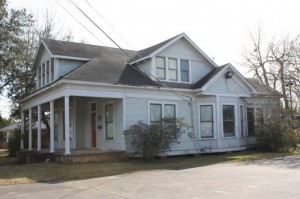 Liberty County is located east of Houston and is considered to be a part of the Houston-Sugarland metropolitan area.  It’s also where a small wood framed home built in 1913 is situated on land a funeral parlor wants to use to expand their parking lot. Fortunately the owners of the funeral parlor had a sense of local history and didn’t want their expansion to result in the loss of one of the county’s oldest homes.  They offered to give the house to anyone who would move it from the future parking lot site – the only stipulation was that it had to remain in Liberty County.

A young couple stepped forward and the old house should soon have a new home and a new lease on life.  Moving costs are estimated to be about $30,000 — so not a bad deal for a home that appears to be in pretty good shape. The moving process they have planned is a little different than any I have read about in the past, and I wish I was close enough to view it firsthand. The top half of the old house will be removed and set aside temporarily, while the first floor is cut in half lengthwise so each half can be moved to the new location.  The two halves will be put back together on a fresh foundation and the top floor replaced to complete the home’s preservation journey. 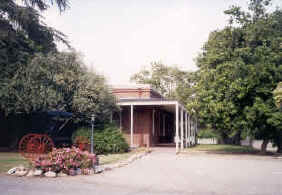 I’ve speculated in the past about the properties an old house might possess to be considered historic and how it often just depends on the eyes of the beholder. Fortunately the young school teacher taking her students on a field trip during the early 1970s understood what she was seeing when they happened upon an old ranch house that bulldozers were about to flatten. The John Rains House in Rancho Cucamonga, California was built around 1860 and located on 13,000 acres that were part of a land grant issued by the Mexican Governor of California in 1839.

The school teacher begged the bulldozer operators to delay their demolition that day and her subsequent actions managed to save the old house that has now been restored.  It’s an intriguing story. It just goes to show what’s possible if we take the time to see the historic reminders of our past around us and take steps to preserve them for future generations.