Preservation of our National Battlefield Parks

As a veteran and someone who has had close friends make the ultimate sacrifice while serving their country, Memorial Day has always had special meaning. The day isn’t about mattress sales, picnics, or neighborhood pools opening for the season – it’s a tribute to the many brave men and women who gave their lives while answering their country’s call. If you want a better understanding of what Memorial Day is really about, postpone the picnic and take your family to a National Battlefield Park this weekend.

May is National Preservation Month and the National Trust for Historic Preservation’s theme this year is “discover America’s hidden gems.” The Trust, and other preservation organizations like it, has worked diligently over the years to save many of the country’s historical battlefield sites from being lost forever to development. They understand that the land is hallowed ground where many shed their blood as a young country took form and grew. Depending on where you live, there may be one of these “hidden gems” close enough for a Memorial Day outing. What better way to show your family what this special day really means? 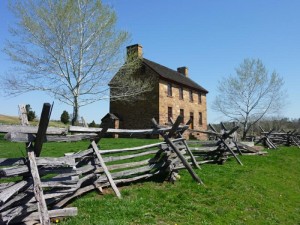 If old house walls could talk

Virginia is a state that boasts a multitude of National Battlefield Parks due to its significant role in both the Revolutionary and Civil Wars. As a long time resident, I’ve had the opportunity to visit quite a few. The Old Stone House that offered refuge for the wounded from both sides still stands at Manassas Battlefield Park. While the old house has undergone restoration, the exterior walls and much of the interior flooring are just as they were as Union and Confederate troops fought nearby.

New Market Battlefield Park is significant to Virginia Military Institute graduates such as myself due the part cadets played in the battle. V.M.I. cadets left their classrooms and marched the 82 miles from Lexington to New Market to defend their state from the northern invaders. The Bushong House that they walked past while preparing to charge their foes still stands today. The old house served as a hospital for both sides during and after the battle. 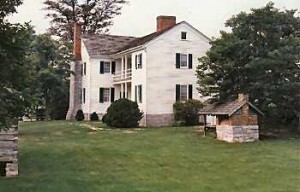 No tour of historical Virginia battlefield sites would be complete without visiting the Stonewall Jackson Shrine at Guinea Station. The legendary Confederate general was wounded by friendly fire at the Battle of Chancellorsville. The outbuilding at Chandler Plantation where he was taken after surgery still looks much the same as it did when he succumbed to his wounds and perhaps changed the war’s outcome.

The pool can wait — take your family to a National Battlefield Park this weekend to show them what Memorial Day is really about.

If you or any of your family or friends are planning a vinyl siding project, take time to read about VinylSidingZone.com’s “America’s Best Siding Makeover” contest. Whether you’re a contractor or a homeowner, submitting photos of your project may make you eligible for some great prizes.