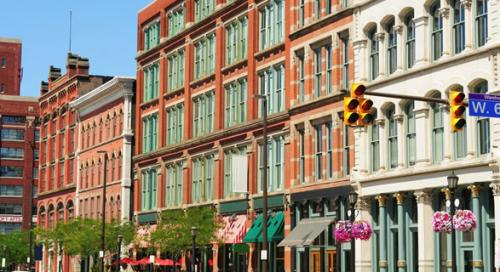 A report produced by the Preservation Green Lab of the National Trust for Historic Preservation provides a comprehensive analysis of the potential environmental benefit of building reuse.

This groundbreaking study in a punny way says “don’t break new ground.”  It offers compelling evidence of the benefits of retrofitting old buildings to be more energy efficient rather than tearing down and building new.  The Greenest Building: Quantifying the Environmental Value of Building Reuse, concludes that it can take between 10 and 80 years for a new, energy-efficient building to overcome, through more efficient operations, the negative climate change impacts that were created during the construction process.

The U.S. has been in the bad habit of tearing down old, often historic, buildings and constructing new ones.  The emerging counter-trend is to consider the entire life-cycle cost of building new versus making old buildings more energy efficient.  In other words, how much energy will a building use over one hundred years including the energy cost of construction?

A new home uses a huge amount of energy and resources to construct.  And even though newer homes are better insulated and have more efficient appliances, we are still using more energy than in the past. We burn up our efficiency savings by bringing more appliances and electronics into bigger and bigger homes.

An older home generally takes very little energy and few resources to renovate.  But, if does not undergo a serious energy retrofit (improved insulation, air-sealing, and HVAC systems), it can use even more energy than a new home.

The study concludes that “building reuse alone is insufficient to meet our responsibilities to reduce climate change related impacts. This study demonstrates that retrofitting existing buildings with appropriate energy upgrades offers the most substantial emissions reductions over time.”

The study also cautions against the uber-renovations of old homes that became common during the housing boom.  It emphasizes that design matters.  Stuff an old house with new materials and you may lose the benefits of reuse.

The authors conclude that the bottom line is that “reusing existing buildings is good for the economy, the community and the environment. At a time when our country’s foreclosure and unemployment rates remain high, communities would be wise to reinvest in their existing building stock. Historic rehabilitation has a thirty-two year track record of creating 2 million jobs and generating $90 billion in private investment. Studies show residential rehabilitation creates 50% more jobs than new construction.”

But if you’ve read about my family’s 111-year-old net zero energy house where we have eliminated our utility bills . . . then you already knew all of this.