The exclusive enclaves of the rich and famous don’t often include older homes. Places like Beverly Hills and Malibu are proud of ultra-modern abodes that suit the tastes of those who have money to burn. Older homes in these areas have often seen a good deal of upkeep and aren’t anywhere close to the real estate chopping block. 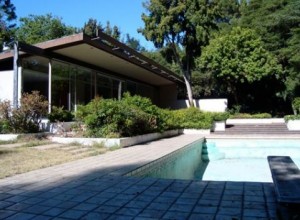 Unfortunately, if a historic home does fall into disrepair, the fate is usually demolition. After all, the land in such a coveted area is often worth more than the house that sits on it. Case in point: the Kronish House, designed by architect Richard Neutra. The house had fallen into such disrepair that the initial real estate listings tried to sell it as a tear-down, with the idea that the new homeowner would put something more modern in its place. What made it an even sadder situation was the fact that this Neutra house was the last of its kind in Beverly Hills.

Why does the house matter? It was designed by one of the most influential modernism architects. Neutra houses were built with an eye toward light. These homes embrace geometric shapes that allow for many windows, thus bringing natural light in to flood the rooms. The original home’s architecture has been altered since it was built in 1955, with additions that don’t hold true to Neutra’s original vision. However, the fact that the bulk of the home remains as it was when first designed decades ago makes it a treasure in the architectural world.

Why tear down history?

Why is there even a question of such an important home getting the wrecking ball? This is where a strong preservation society could help, but Beverly Hills has no serious policies in place to prevent things like this from happening. In a land of so much wealth, the only hope these old houses have is a generous owner who is willing to see the value and put in the time and effort for preservation.

Fortunately, that is exactly what happened to this place. Originally up for sale at over $13 million, the house sold for about $7 million to a family who vows to preserve it. Given the photographs of the interior, it seems there will be a lot of preservation to be done. Water damage is evident in the ceilings and upper parts of the walls and as a result, there are serious mold problems. Apparently the air conditioning and the electricity in the house are in bad shape. The pool is leaking and so is the roof. Much of this came from sheer neglect–the former owners didn’t use all of the 7,900 square foot house, and when they moved out there were eight full dumpsters of trash hauled away.

Plenty of hope for this old house

But there have been plenty of old houses with even worse damage that had a successful renovation, so this place could be in good shape within a few years. It will join other Neutra houses that have been restored over the years, including the 1946 Kaufmann House in Palm Springs, which is held up as an example of how historical architecture can be considered a form of art, just as worth of collection–and preservation–as the works of master artists hanging on museum walls.