Though I’m disappointed that my grandma’s house isn’t the right old house for me, I’m trudging on and looking for examples of old house restorations and renovations to inspire me in the meantime. And since I’m now wintering indefinitely in a different rural Nevada community until I find that perfect house to purchase, I have a fresh pool of old houses to write about. 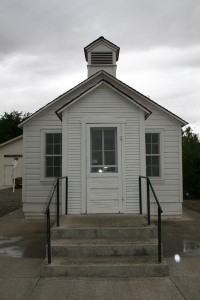 East Walker No. 9 now located in Yerington, Nevada, at the Lyon County Museum

When I spoke to Michelle Schmitter, an architectural historian and preservationist, she recommended that anyone who is purchasing an old home should talk to the local museum or curator to see what local resources are available and to see what maps, photos, and history might be available for the specific property you’re looking into. Lots of OldHouseWeb Forum members have given the same advice: start with your local museum.  So that’s what I did.

I expected the Lyon County Museum in Yerington, Nevada, to be a lot like the Central Nevada Museum in Tonopah, Nevada. Rural museums are often surprising, and I’ve had a lot of luck getting help  with old house research and photos from Tonopah’s little museum. Yerington’s museum is small and run by volunteers who have a passion for historical preservation. What I didn’t expect was preserved and restored buildings at the museum.

The East Walker No. 9 school house is a preserved one-room school that is maybe 300 square feet, including the cloak room. The area was first settled in 1859 and the school was originally built in the Pine Grove mining district around 25 miles southwest of where Yerington is today. In 1895, the school was moved to East Walker in sections (presumably by wagon) because nine students in grades 1-6 were enrolled in school. At this time, the cloak room addition had already been added. 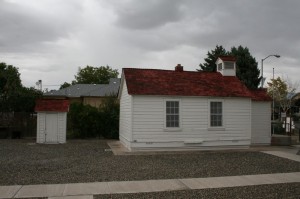 Of course the school never had running water or plumbing. A wood stove heats the little school; students were required to bring one piece of wood to school each day and the older boys stoked the stove.  The outhouse is a two-seater and was built to match the school. This, too, is at the museum.

The school closed in the late 1940s due to lack of students, but then re-opened again in 1950.  It was closed permanently in 1952 (the last lesson was never erased from the blackboard). The school was moved to Yerington in the 1960s and then moved again to the museum location in the late 1970s. 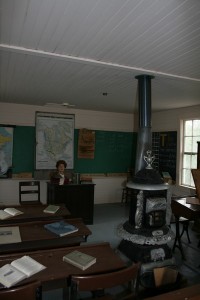 Despite all the moves, this little school is in excellent shape. The only things not original are the electric lights, the smoke detector, and the cloak room.  The floors, ceiling, doors, and hardware are all original material, as is the outhouse. Though the blackboards are not original, per the 1896 photo, the teacher’s desk and one set of students’ desks are original. Old flashcards were found in the crawl space, and the original East Walker school bell was recovered. This school house got lucky. What about all the other schools, especially the little ones, that weren’t so lucky?

Converting an old school into a home isn’t a new idea. Ever since I wrote about architect Jay Shafer who builds tiny houses and lives in one, too (96 square feet!!), I keep coming back to the idea of living in a very small house. I don’t think I could do it, personally. But if the tiny house, minimalist/conservationist movement gains momentum, I think it’d be nice to see old (and therefore more “green”) structures like old school houses restored to preserve history a bit of history that we’ve clearly moved far away from.