If you’ve been an OldHouseWeb.com visitor for any length of time, you’ve probably visited and even vented on the forums. After all, renovating an old house can be frustrating and challenging at times. The forums are full of old house horror stories, a lot of which stem from the ridiculous things that previous owners have done when renovating. You know, stuff like using tin cans to patch holes in wooden flooring under the carpet. Or plastering over windows or cutting large holes in things, like walls.

If you’re lucky, you can vent to a sig other or a friend who is on your work crew and you can bemoan the fact that person who did the ridiculous, shoddy work is an idiot! A tool! A complete moron!  Then you can pop on and share your story in the forums where other people validate you that it’s all true (idiot! tool! moron!).

But what happens if those ridiculous things, those truly terrible renovation decisions, were made by someone related to you. And that person is on your work crew. 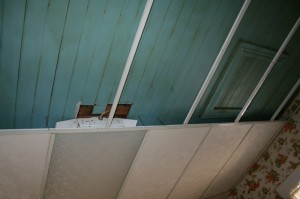 For those of you who don’t know, I’m purchasing a house built in 1905 that has been in my family for the past 60 years and belonged to my grandmother when I was growing up. She was fortunate enough to rely on my father to do her home repairs for over 20 years. But my dad is an engineer. With him, everything is function. Aesthetics? History? Heritage? Preserving the most interesting elements of an old home? Completely off the radar.

That’s the only way I can possibly explain why he thought it was a good idea to “modernize” my grandmother’s kitchen in the late 1970s by installing a commercial office ceiling with a fluorescent light. What I never knew until I moved into the house with the intention of buying it is that he sawed a huge hole in the original wooden tongue-and-groove ceiling in order to do it. It was also his idea to pour a concrete floor in the bathroom where the ceiling isn’t high enough to stand in the bathtub.  And it was also his idea to slap cement all along the backside of an old rock wall my grandpa built.

Because some of the things that previous owners do seem lazy or cheap or just ridiculous, it’s easy to get emotional about. It’s doubly easy when you’re related. But, just like previous renovations done by anyone else, the damage is already done. There’s simply nothing to be done about renovations gone awry other than to fix them, regardless of who did the doing. 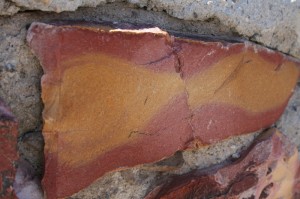 I find that the more outside support I get for a particular project, the more willing my dad is to consider “alternatives.” I’m working with a friend who is a contractor on a couple of different options to work around the hole in the kitchen ceiling. The rock wall?  It’s not safe, so it’s coming down but as much of the rock will be re-purposed as I can in the yard. Instead of going down through the bathroom floor, I’m going up.

Like any renovation project, you have to play the cards that you’ve been dealt. And some times, especially when family is involved, you have to get creative.