Remembering to Do Things Differently

By: Brett Freeman , Contributing Writer
In: Garden And Lawncare
0
Comments

Before moving to Charlotte, I spent four very long years living in a much maligned and ridiculed city that I won’t name (hint: it sits on Lake Erie). I don’t feel any particular need to repeat any of the numerous jokes and stereotypes often associated with this particular city (although you shouldn’t take that to mean I’m refuting any of them): I’ll leave that to everyone else who’s been there. And I can’t say if the native pessimism I found to be quite pervasive in this city is the cause or the result of the city’s dubious reputation. I will say that I found the pessimism to be wearying, and never moreso than when it manifested itself, as it often did, with these seven words: “But we’ve always done it this way.” 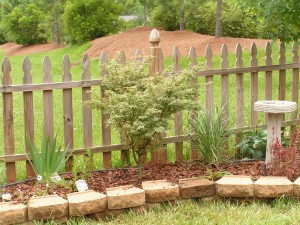 Japanese maples are red, right? Not always. I did install a more traditional Japanese maple--red, dessicated leaves--but this "Butterfly" Japanese maple with variegated leaves was an even bigger hit. It also cost half as much as its trendier cousin.

I mention this for two reasons. First, and obviously, I still bear the unnamed city a bit of a grudge. But more importantly I bring it up because the same attitude can hinder decision-making, even outside of the Great Lakes region. I discovered just how much this week while I was installing a client’s “dream garden.” The plans she had were very detailed and specific–and had been pulled from the Website of a garden club in Missouri, which has a climate and soil completely unlike that in North Carolina. Having lived in both places, I can say that even in summer, when the weather in both places is seemingly similar, it feels completely different. On a mid-summer day in Charlotte, it can be unpleasantly hot and muggy, but it’s manageable. During summer in St. Louis, though, people have been known to take long, hot showers as a way to escape the humidity. It’s insane. 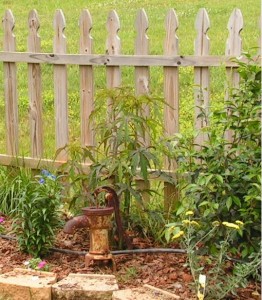 This hibisucus is native to the Carolinas. It was also difficult to find.

But I digress. My point was that a garden plan that is well-adapted to the Missouri climate is almost certainly less so to conditions in the Carolinas. Which my client knew: she gave me the plans so that I would have a sense of the look she was going for, if not the actual plants. And while I grumbled initially at the task, it actually turned out to be incredibly liberating, because it forced me to stop doing what I’d always done–that is, create a plan using plants that are familiar to me and common in the local nurseries–and instead really open my eyes to the incredible variety of flowers, trees, and bushes that are available. Ironically, many of the plants I ended up using were native species. Even ironicaller (I know it’s not a word, but it should be), I had to search and scour to find many of these native plants. There is a hibiscus native to the Carolinas, for example, and eventually I found one, at a small local nursery. But it was no easy task, because most nurseries only stocked more popular and, presumably, common varieties of hibiscus which, incidentally, grow poorly in this area’s dense, clay soil.

So while the project was at times frustrating, it was also an eye-opener, and it reminded me a more productive way of saying, “We’ve always done it this way” is, “Been there. Done that.”