Home / Old House Blog / Replace Your Plaster Walls. And Then Keep Them.

Replace Your Plaster Walls. And Then Keep Them.

I recently posted about whether to repair or replace plaster walls in older homes when they start to crack and show their age. I argued that while repairing cracks is possible, if arduous, it’s often easier over the long run to replace the plaster with drywall. Reader Andy Fisk rightly pointed out that “easier” isn’t something that old house owners embrace, or even comprehend. (If you doubt me on this, check out this post by old house owner and OHW blogger Dan Cooper. Or this one.) But I have to say, after hearing what a friend-of-a-friend did with her plaster walls: Andy, you have but scratched the surface.

Let me begin by pointing out that the easiest way to “replace” plaster walls is to install drywall directly over the plaster. True, you lose a fraction of an inch of space, and you might drive yourself crazy trying to find the framing to drill into (you don’t want to attach drywall to the lath), but this is still the quickest and easiest route. More complicated still is to remove the plaster before installing the drywall. But even this pales in comparison to removing the plaster more or less intact, replacing it with drywall, and then hanging the old plaster over the new drywall.

Am I joking? No. Misleading, yes, but not joking. And I do have to admit: the results are impressive.

If you’re wondering why anyone would do such a thing, the answer is that the person in question, Judy Pedersen, is an artist, and everyone knows artists do weird stuff. 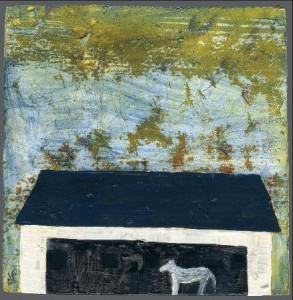 Okay, a better answer is that Judy appreciated the character of her plaster walls. Plaster has texture: it’s surface is theoretically supposed to be uniform, but of course it’s not, and that’s what gives it character. This is undoubtedly why the ancient artists used plaster, not drywall, when creating their frescos hundreds or even thousands of years ago.

Judy was similarly inspired by plaster as a painting medium, so when her plaster walls came down, she kept the pieces, and painted them. The finished products are not technically frescos, which are painted on wet plaster, but they have a similar feel to them, with the surface being painted as much a part of the finished product as the paint. (That’s me trying to sound like I know something about art. I hope it sounds more impressive than, “That’s way cool,” which was my initial reaction.) (And I don’t know the she has, but she certainly could hang her plaster works of art over the drywall that replaced the plaster, as I suggested earlier.)

I always enjoy seeing what I think of as “legacy projects,” where people make something new or decorative out of old house items like fireplace covers or wooden doors or old slate shingles. I have to admit, this is the first time I’ve seen anyone recycle their plaster walls.