Home / Old House Blog / Save Water, Money, and the World With Rain Barrels

Save Water, Money, and the World With Rain Barrels

Growing up in New England, I generally associated “drought” with distant, exotic places. Places like Ethiopia. The Australian Outback. California. In fact, the closest brush with drought I had as a kid was during my junior year of high school, when an historically dry winter had followed an historically dry summer and fall, and concerned local officials were on the verge of instituting water-use restrictions. Then it rained for about a month straight, and concerns about the lack of water became concerns that the Rippowam River was going to overrun its banks. 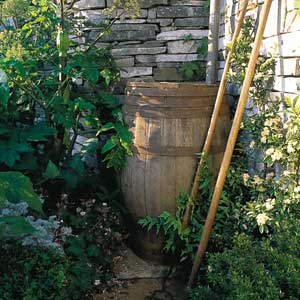 An old whiskey barrel looks right at home next to this older house.

Things are quite a bit different in North Carolina, where I now live. In fact, the state is just emerging from a drought that lasted for the better part of two years, and watering restrictions in the Charlotte area were recently lifted for the first time since the summer of 2007. Being in the irrigation business, I spent a lot of time wondering what you can do to keep your lawn and plants alive when you can’t water. Greywater systems, which allow you to reuse the non-sewage waste water your house generates for irrigation, are great in theory, but simply not practical in most cases for residential properties. Rain barrels, on the other hand, are inexpensive, relatively easy to install, and a great way to maximize the benefits of whatever rain does fall. And if you’re willing to spend a little extra, they can also add to the historic feel of older homes.

Somewhat surprisingly, given that sales of rain barrels have risen steeply in the past few years, I’ve not seen very many around here. But I have been actively encouraging my clients–particularly those with edible gardens and large flower/planting beds–to consider installing them. To put it in a context of how much water is saved, consider that a single 55-gallon barrel holds more water than is used to flush a toilet 30 times (I don’t know why that particular comparison occurred to me, but I’m sticking with it). And because the rain barrel would continuously be getting refilled each time it rains, the total water saved would far exceed 55 gallons. Rainwater is also better for your plants and lawns than tap water because it is free of chlorine and fluoride.

I freely admit that the plastic rain barrels available at most home improvement stores leave a lot to be desired aesthetically. If this is a sticking point, you can build an enclosure that matches your house. Or, even better, spend a little more for a wooden wine or whiskey barrels. These old barrels are cool-looking, and they blend well with older houses, particularly those in the west and southwest, which, once upon a time, might well have included rain barrels when they were built.