Four More Reasons to Save Your Stone Wall

I’m still very much in that awkward place of letting go of the renovation dreams I had for my grandmother’s house now that I’m no longer buying it. One of those projects, that caused me more stress than it should have, was the rock wall made of wonder stone surrounding three sides of the 1/3 acre lot. Wonder stone is a very lovely type of rhyolite with ribbons of rose, cream, peach, and yellow rippling and pooling, sometimes like a desert sunset. My grandfather built that wall as a rehabilitation project after sustaining a serious head trauma from a near-fatal car accident. The result was a not-so-well constructed wall. 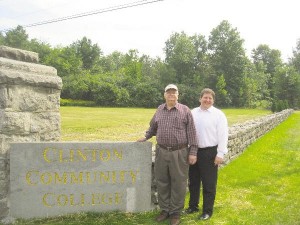 I was reminded of that rock wall today when I read about Clinton Community College restoring a beautiful rock wall on their campus. The wall had been moved once when the road was widened and the wall wasn’t properly reconstructed at that time. The school secured a donation for half the cost of the project from a local philanthropist and hired a landscaping company to rebuild the wall using the original stones. An irrigation system was also placed under the wall to help prevent winter damage. The total cost was around $50,000.

I was happy to see that price tag because I know without a doubt that I wouldn’t have spent that kind of money to save grandpa’s sub-par wall made of pretty rock. Of course, I could have repaired the wall myself, and I’d considered that.  When debating the pros and the cons of the project, I came across this 6 Easy Steps to Stone Wall Repair and was encouraged by the title. However, those six easy steps require that the stone wall be well-constructed, and mine wasn’t. 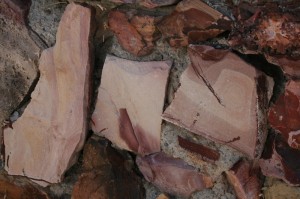 Because the crumbling wall was a safety hazard, I’d decided to re-purpose the wonder stone in garden beds, a fire pit, and even decorative rock for my grandma and grandpa’s graves. It’s beautiful rock, and–more than once–my family has had to discourage people from taking pieces of the wall as mementos. My rock wall isn’t special in that regard. In fact, Bet Zimmerman, a member of the Woodstock Conservation Commission and is a Certified Environmental Professional, wrote an article in 2007 about the preservation of stone walls and the trend in the Boston and Rhode Island area for stone walls to be sold or in some cases stolen in the middle of the night. There’s quite the market for reclaimed stone. Zimmerman points out some additional facts to consider before tearing down an old stone wall, so I thought they’d be worth sharing:

I’m somewhat relieved that I won’t have to make the decision about that wall, but at the same time I dread that someone will make it without thinking through all the considerations. If you’d like to learn more about stone walls, there’s a project in New England called the Stone Wall Initiative that has a mission: to appreciate, investigate, and conserve all stone walls in New England. I suspect those of you who, unlike me, still have stone walls to consider, could use another resource.