Seeking Spirituality? Find It in These Homes

One of my favorite magazines is The Week. It’s kind of like Time or Newsweek, but way more informative and entertaining. It aggregates news from all over the world into one 50-page glossy package, complete with a crossword puzzle, celebrity news and a feature called “Best Properties on the Market.” Often, these homes are multimillion-dollar palaces, though the editors often include a “steal of the week” in the $300,000 price range.

This week’s spread was interesting for old house lovers — or perhaps, I should say open-minded old house lovers — because it focused on homes in former churches. Who knew? Where I grew up outside of Chicago, there was a restaurant in an old church (and residents of the heavily Catholic area all questioned whether it was sacrilegious to dine there). But imagine living in a former house of worship? It’s hard for me to fathom. That said, I do love the idea of living surrounded by beautiful, historic wood and stone work, ornate railings and lots of light. 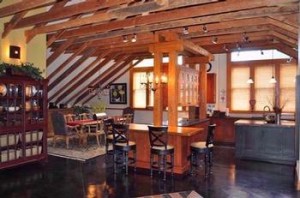 The main dining area of a 19th century church converted into a home in Boulder, Colo. Photo courtesy of Goodacre & Co.

One of the church-house listings, priced at $4.75 million, happens to be about two miles from my house — and it is absolutely stunning. Built in the late 19th century, it was one of the first churches in Boulder, Colo. Now outfitted with new plumbing, wiring — as well as a gourmet kitchen and other finishes you’d expect in a nearly $5 million home — it’s got amazing old house character, as well as every bell and whistle offered in an upscale new home. Plus, it’s situated in a terrific historic neighborhood near shopping, dining and hiking trails. It certainly got me dreaming.

It also prompted me to Google this old church-house phenomena. I discovered many listings and news stories about former churches in England converted into homes.

Strangely, I didn’t find any listings in the U.S. But I was able to look up the individual homes featured by The Week. Next to the church-home in Boulder, my second favorite was a former Russian Orthodox adobe property in Sante Fe, listed for a slightly more affordable $2.8 million.

Built in 1927, the main house is 3,200 square feet and the property includes two 900 square foot guest houses. My favorite features, however, are the hardtrowel plaster antique Mexican doors and kiva fireplaces. The idea of spending my days and nights in that old house sounds beyond spiritual.