Slide down the pole into your old firehouse conversion

When I was very young, most of my friends dreamed of becoming cowboys or firemen when they grew up. The lure of being a cowboy came from watching Saturday morning programs where Roy Rodgers, the Lone Ranger, and Sky King always seemed to save the day. However, we always knew those were just television shows with fictional characters — they weren’t real like the firemen we saw racing around town on their bright red trucks or cruising down Main Street during the holiday parades. 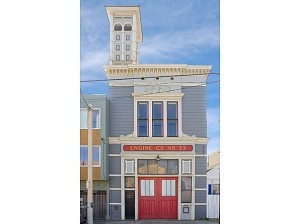 I think the best field trip I ever had was when my fifth grade class toured one of the town’s fire stations. We had a chance to see the gleaming trucks up close, pet the Dalmatian puppies, and the highlight was watching real firemen go down the legendary pole in the old station house. In our minds cowboys belonged in the world of make believe, but firemen were real live heroes – of course if we’d grown up in a western state, we might have thought differently.

If you grew up wanting to be a fireman but it never quite happened, you might be able to at least live like one by converting an old firehouse into a home — you may even be able to slide down your very own fire pole. I’ve written about a lot of different old building conversions the past several weeks and thought it might be tough to top the romanticism of living in an old lighthouse, but we might have a new winner.

One of the great things about converting an old firehouse is that their architectural design often reflects the period during which they were built and the style prevalent in the surrounding area at that time. An old lighthouse can be beautiful and very deserving of conversion, but with a design based on function — there only seems to be several styles available. However, old firehouses were often built to become a part of the neighborhood they served. 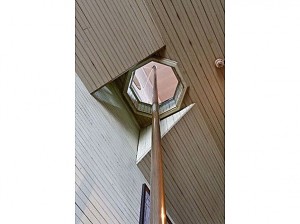 Slide down your own pole -- photo from zillow.com

An old station in Washington State that may be converted into a home has an old tile roof and a stuccoed exterior that reflects the style that so many people associate with the west coast. It appears like it might be a fairly easy conversion and you shouldn’t have to worry about garage space. An old firehouse in San Francisco that’s been converted into tour business fits right in with the narrow town homes that line the city’s steep streets. The structure was built in 1896 and predating the great earthquake and fire of 1906 makes it a very historic San Francisco building. The building may still be for sale and looks like it might not require much work to become a home.

Old firehouse conversions aren’t limited to the west coast — there are many old station houses in the larger cities of the east coast looking for new owners as well. Anderson Cooper evidently had the same childhood dreams as the re