I’m in the process of buying an old house. A small old house. 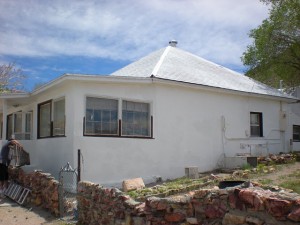 The roof indicates the original size of this small old house: 648 square feet.

The house was originally built in 1905 and was 24 feet by 27 feet, for a grand total of 648 square feet. That included a kitchen, a living room, and a bedroom. No bathroom. Well, not an indoor one with plumbing, at least.

The outdoor root cellar was converted to a bathroom and my grandpa added an enclosed front porch in the 1950s, bringing my total square footage to 984.

When I was looking at homes in this and other rural communities, I was looking for a one- or two-bedroom house. Why? I’m a single gal with a dog and no kids. How much space do I really, truly need? Because I was looking for a smaller space, all the homes I looked at were old. Somehow I came to the conclusion that a lot of older homes were small, especially because of the historic trend of new homes getting bigger and bigger.

But that’s not true.

Of the single, detached houses built before the 1920s, only 3.2 percent of houses were the size of my house! By pre-1920s standards, I still had a small house. Here are the details, courtesy of the Census Bureau:

The number of rooms in a house was also much higher than I expected. Almost 70 percent of homes built before 1920 had six or more rooms. My house? In the bottom two percent. While I’m surprised that so many old houses were and are bigger than mine, it doesn’t make me regret buying a space that meets my needs.

Personally, I have never had much interest in keeping up with the Joneses, despite the historical trend we’ve seen in the United States. In 1973, the average square footage of a home was 1,660 sq. ft. That trend continued to climb until it reached its peak in 2008 at 2,519 (side note: houses in metropolitan areas are on average 300 square feet bigger).

Recently, though that trend has reversed. Homes are getting smaller. Sociologists, economists and other-ists have their theories, some of which include the recession. Other theories include cultural shifts resulting from urban congestion or increasing environmental awareness and responsibility. How old is the old adage “less is more,” and is it finally applying to homes? Whatever the reason, new homes are shrinking.

Architect Jay Shafer designs tiny houses. Like, really tiny. They range from 65 to 774 square feet. His own home is 96 sq. ft. He sleeps in a two-person loft and his entire bathroom is his shower. The reasons why he’s lived in three houses all less than 100 feet over the past 10 years include that he doesn’t like vacuuming or dusting, or taking care of a lot of stuff he’s not really using. He’s also not spewing extra gases into the environment or consuming resources just because of a need for wasted space.

Whether you’re into small old houses or tiny new houses, there is something to be said for being aware of your personal need of space as it relates to both cost and the environment. How much space do you need?