Question: Hey MyFixitUpLife, I have an old house question. I feel like I should know the answer to this, but I don’t. On the roofs of many old houses, along the eave, there are…best as I can describe it…bird-shaped thingies. I’ve seen others that look octagonal and yet others that are round. I’ve seen them on steep roofs and not-so-steep roofs. My bank even has them. They look great, but do they do anything?

Answer: The answer is yes. What you’re talking about are called snow guards. What they do is hold the snow-pack on the roof, giving it a chance to melt rather than slide in, truly, a small and deadly avalanche. I learned about snow-guards installing the ultra modern roof we have on the MyFixitUpLife HQ and what they do is simple. How they look is awesome. I’ve included a photo of ours at work from inside the house (notice the snow piling up against them.) Fellow Contributor Conrad shows them on a metal roof from outside a different house. 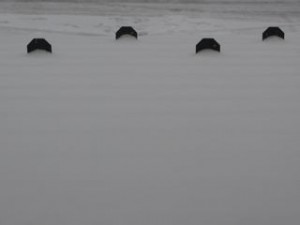 Snow piling against snow guards on a DaVinci RoofScapes roof.

Snow guards’ function is to trap the snow on the roof. Snow–like water–is cohesive. If you’ve ever thrown a snowball and the snow that hit the tree or Stop sign or whatever stuck there, that’s cohesion. In other words the molecules stick together. And because they stick together, you don’t need a continuous barrier to hold them together at the roof’s edge, which is why snow guards are spaced every foot or so, usually in two courses. The other way you know they stick together is when the slide in one very large slab off your second story.

The reason you need them–and why you see them mostly on old houses–is because certain shingles, notably slate, steel, and the polymers we have (DaVinci RoofScapes) have little ability to retain the snow like gritty asphalt shingles. In other words, they’re just slippery enough that snow won’t hold. What that means is that when the layer of snow just above the roof melts, the entire snow pack goes. At once. I’ve seen this happen. It’ll get your attention.

The good news is that snow guards are easy to install on a new roof or retrofit into an existing one. And, they add an element of beauty to (especially if you have asphalt shingles) an often overlooked style element of most homes (don’t get me going on this). Get them in fluer de lis, wings, sunburst shapes, whatever. Theresa described them on MyFixitUpLife–aptly I hasten to add–as “roof jewelry.”

Jewelry that does something.