SORT program can save old houses

Reading about the latest battle over preserving an old house can be frustrating. In many cases, the homes sit in some state of decay and disrepair while the town, homeowners, historical society and several others argue over the funds to fix it, or whether it should be fixed in the first place.

That’s why it is refreshing to see an example of what a truly motivated community can do. In 2004 in Topeka, Kansas, then-President George H.W. Bush planned to attend a ceremony that would honor the old Monroe School as a National Historic Site. Upon realizing that the eyes of the world would be upon this little neighborhood, residents set out to make it as pretty as possible. Here’s what they managed to do within a short 90 days:

It worked so well that the community itself was shocked at what it accomplished. Not content to stop there, the work continued long after the President’s visit. The town reached out to other neighborhoods and to date, there have been eight areas brought back up to a beautiful standard–including numerous old houses. The project now has a name, SORT, which stands for Stages of Resource Targeting. 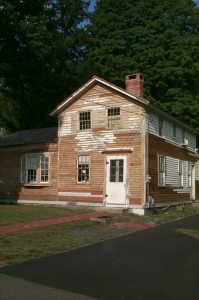 What was expected to simply improve the look of the Monroe neighborhood has had a wide-ranging effect. Topeka deputy city manager Randy Speaker told the Hutchinson News that the areas have seen greater public interest, increases in private investment, reduced crime, increased property values and increased home ownership.

Today, the program is no longer working at the blistering 90-day pace, but rather at a reasonable three years per project, which is plenty of time to get the community involved. The plan makes up to $30,000 available for repairs to an owner-occupied home, as well as additional money for lead paint abatement. Rental properties are limited to $12,000 and the money is only to be used for exterior repairs. The interior of the house is the landlord’s responsibility.

The project worked so well that in 2010, Neighborhoods USA awarded Topeka with the Best Neighborhood Program Award.

SORT works well for those who own an older house but don’t have the money to fix the problems it has. Though the money might not be enough to restore the home to it’s original shape, things such as a new roof might protect the home long enough for homeowners to save money for other improvements. The grants aren’t enough to pay for items like repairing original windows or plaster walls, but it is enough to keep the old house–and most of its architectural details–from a meeting with the wrecking ball.

When the program can’t save old houses, sometimes the result turns out for the common good regardless. In some cases, new homes were built on the property, and in the case of one community, the demolished houses made way for a community park.