By: JoVon Sotak , Contributing Writer
In: In The News, Old Houses
2
Comments

Last week’s post was about federal tax breaks for old houses and historic properties (if you already read it, be sure to check out the comments left by readers and the update of links at the end of the post to important links to the IRS’ website). This week, I’m rounding up some information on state tax breaks and other local tax incentives. 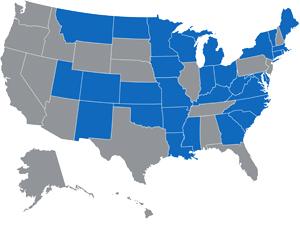 The blue states offer tax incentives for historic preservation, according to the National Trust for Historic Preservation.

According to the National Trust for Historic Preservation, there are 31 states that offer tax incentives for the rehabilitation of historic buildings. Just this year on April 1, Minnesota became that 31st state. States that doesn’t levy income tax do not offer tax incentives for historic preservation of buildings. Additionally, these states don’t offer a break: California, Oregon, Idaho, Arizona, Nebraska, Illinois, Alabama, Pennsylvania, and New Jersey.

If you’re lucky enough to live in one of these 31 states, you’ll need to get the specifics because every state’s policy is a bit different. Be sure you get these questions answered:

Be sure to check with your county or local agency responsible for assessing and collecting property tax, too. Though these incentives may not be enough to make you buy an old home if you weren’t already considering it, they may sweeten the deal or even make owning and renovating an old house a possibility.

It’s probably not much of a surprise that the economy is impacting historic homes. Less money to go ’round, right? But many state governments and local agencies are facing budget shortfalls and are examining tax policies. Take a recent story from Austin, Texas, for example. Five local taxing entities had been giving a property tax discount for 450 historic buildings. Two of those entities are the Austin school district and local community college. The whole program may be scrapped after this year. The Austin school district will make $1.8 million in revenue, but for some home owners, like Paisley Robertson who cleans home for a living, the increase in taxes from $3,826 to $5,727 for her restored and converted barn may not be able to maintain her home.

One thing is for sure: old houses aren’t cheap. And if you need the tax breaks to make it work, you might want to reconsider.