If you have dreams of staying in your historic or old home until you wheeze your last breath, you’re not alone. Beyond the blood, sweat, money and tears that you’ve put into your home (or still plan to), most old-house enthusiasts simply love their homes and don’t want to think about leaving.

But unless your home is a single-level home or you’ve discovered the fountain of youth buried underneath a previous homeowner’s crappy patch and mud job, chances are you are going to get older one day and maybe have a little bit of trouble navigating those stairs and getting in and out of the tub.

Selling your home or turning it over to younger members of your family aren’t your only two options. Your house can retain its historic charm and be renovated to provide a home for you and your entire family for generations to come. No one faults old-house owners for replacing wood or coal kitchen stoves with gas or electric ranges or for installing dishwashers, washers and dryers or–heaven forbid–indoor bathrooms. With showers!

Keeping your home 100 percent historically accurate means giving up those things. Who wants to go back to the days of outhouses and washtubs? 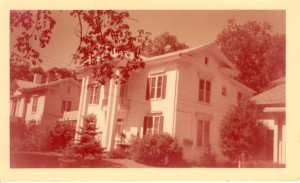 The house was split into two halves and moved to face Noland Road in Independence, Missouri.

The Stone-Gamble House in Independence, Missouri, is a great example of a historic home that has adapted time and time again throughout its history and has been renovated to be both more modern and wheelchair accessible. 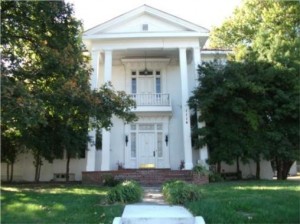 This two-story, five bedroom, three bathroom house was built in 1856 in the beautiful Greek Revival style we sometimes associate with the south. It was the original pre-Civil War plantation home of Napoleon Bonaparte Stone. It was built from hand-hewn walnut harvested from Stone’s property and set 7 feet above the ground by Stone’s slaves. Until 1920, the house remained unchanged but was then split into two pieces and moved 300 feet.

The two halves were kept as separate houses by owner George Jennings. Jennings lived in the front portion and sold the back portion.  The front portion of the house was destroyed in the 1960s.

During the 1940s, the home’s most recent owner Roy Gamble converted the remaining house into four apartments to rent to returning WWII soldiers and their families desperate for housing. In the 1950s, the house was converted back to a single-family residence and a two-story addition was built onto the back of the house with a kitchen, family room, three bathrooms, and two bedrooms. 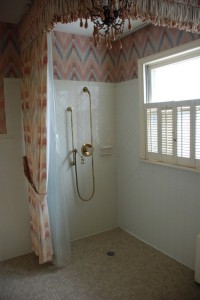 One bathroom's shower in the Stone-Gamble house was renovated to be wheelchair accessible.

During the 1980s during another remodel, Gamble had a stroke and renovation plans were adapted to accommodate his wheelchair while retaining the house’s historic charm, such as the style of the original doorways. The house has wider doors and doorways, an elevator, and a fully accessible bathroom on the second floor. These renovations have added to the house’s rich history and ensure that the next family who owns it can stay for generations. 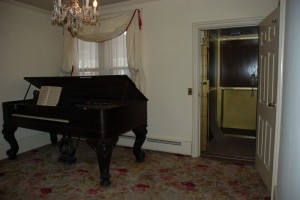