The Tennessee winter of 2007 was cold, and the house wasn’t much better. I had moved into the Victorian the previous summer, and I had learned to deal with the sweltering heat of a home in the humid South that had no central air conditioning and windows that didn’t like to open.

Now I was dealing with just the opposite problem — a home so frigid that the furnace simply couldn’t keep up, even with the added help of space heaters. 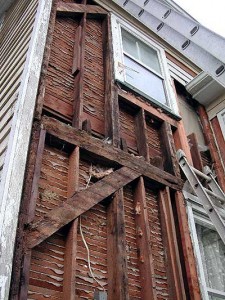 The master suite was by far the coldest room in the house. I moved the biggest heater in there, plugged it in and immediately blew a fuse. Enter an extension cord and a more reliable outlet, and I had heat that didn’t make a dent in the temperature.

Insulation leads to a bare-bones surprise

A week later I had my contractor out to look at the place. Putting more insulation in the walls would be a quick and easy job. But when he started poking around the exterior bedroom walls, his confidence quickly changed to disbelief.

“Look at this,” he said, and slipped a screwdriver through a tiny seam in the wallpaper. Much to my surprise, the screwdriver disappeared to the hilt.

I was completely confused. “Is that supposed to happen?”

“There’s no drywall,” he explained.

I stood there for a moment and stared at the spot. Surely I misunderstood him.

He tapped the end of the screwdriver along the wall, listening. He sighed. “This is bad.”

If I had a dime for every time I heard a contractor say that, I could have bought every Victorian on the block.

I saw for myself a few hours later. Instead of drywall, there was a layer of very thin yet sturdy cardboard. Yes — cardboard. Beyond that were the studs, and beyond that was a thin layer of sheathing underneath the clapboard siding. There was no insulation at all. No wonder the room was so cold — it was like trying to keep heat in a cardboard box. What should have been a little blown-in insulation turned into a major renovation project. 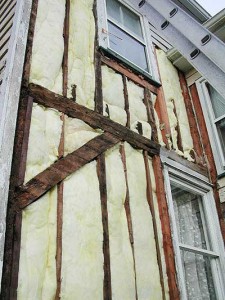 Why didn’t I notice this before? If I had tried to hang any pictures on the walls, the problem would have become evident immediately, but I hadn’t begun to decorate the room yet. The wallpaper looked very nice, with no signs of peeling or mildew, so I hadn’t taken a closer look.

Even both home inspectors missed it. But why would they notice? I have never seen a home inspector walk through the house with a screwdriver, testing how sturdy the walls were. Their opinion is limited to what they can see, not what is inside the walls. Old houses often have poor insulation, so a draft around the windows, even a strong one, would simply be dismissed as an insulation issue.

In the end, insulation went in, along with a cozy layer of sturdy drywall. Wallpaper covered it nicely and soon heating was not an issue. Unfortunately, my wallet was much lighter.

The moral of the story? When you are buying an old house, be very careful to inspect absolutely everything, even the walls. You never know what might — or might not — be lurking behind them.