Now that the holidays are here, so are the Christmas lights and candles burning into the night. That makes this time of year the most dangerous for house fires. Fire safety experts claim that fires from candles alone jump 300 percent from now through the New Year. 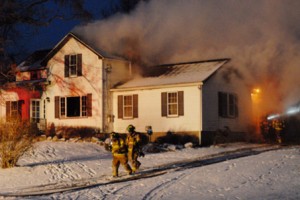 But a recent ABCNews report found that if you live in an old house, the chances of your home surviving the fire are much better than that of a very modern home. In fact, a side-by-side comparison of a modern home and an older home in flames found that the modern home went up in smoke much faster–up to six times faster.

Why do new houses burn faster?

The reason is attributed to the materials used to build the home, as well as the materials inside it. Homes built over 50 years ago likely used solid lumber and other heavy-duty materials. Today’s homes are built at a much faster pace and often at a cheaper price, thanks to materials like particle board and synthetics.

These materials be lighter, cheaper and easier to produce, but they are also much more hazardous in the event of a fire. The newer products are often petroleum-based, and that is pure fuel to a raging fire. The older products are made of natural materials and thus have a longer burn, giving firefighters more time to put the fire out. Most importantly, that longer burn gives your family much more time to get away from the danger.

The report points out that fire-resistant technology hasn’t kept pace with the rapid growth of new products. The only possible exception might be mattresses; in some cases, mattresses that are deliberately set on fire will only smolder, or put themselves out altogether. Though some of the same can be seen with modern insulation, most of the elements of modern homes are more dangerous than their older counterparts.

Want to make your renovation as safe as possible? Look for products that have a lower rate of burn, as well as a lower rate of fumes and gases released when they are heated. A good example of this is fiber cement siding, which resists fire very well and looks great on older homes. Another good option is solid plank flooring versus veneer that only looks like the real thing. Speak with your contractor about choosing original woods and traditional materials, such as concrete.

When you are renovating an old house, it might be tempting to look for modern materials that mimic the originals in order to save on money and effort. However, that particle-board won’t stand up very well to the ravages of a house fire. Solid wood costs more, but it also provides a measure of safety and peace of mind that newer products can’t offer.

On a final note, remember that most serious house fires begin when furniture is somehow ignited. That’s why it pays to furnish your home with solid woods and other old-fashioned materials, rather than particle-board or synthetics. This makes a great argument for furnishing a historic home with antiques.