Paul in Vermont was reading the New York Times and saw an article that referred to a building as a “taxpayer-style.”Paul couldn’t find anything with Google, so he shot me an e-mail, asking if I knew something about this style. So, for Paul and Google, here’s what I know on the subject.

The Taxpayer isn’t a style of architecture – it’s the name given to the purpose of a building that eventually evolved into a form of building.

In large cities, investors would speculate where the city might expand, beyond the current commercial center.They would purchase plots of empty land, in the hopes that someday soon a major developer will come forward with an offer to buy the land to build a giant steel and concrete building.It might take several decades before public transportation routes reach the area, or other improvements occurred, making it more suitable for big buildings.Although the land could have been bought relatively cheap, the property taxes could deplete the investors’ funds if they have to sit on the property for a long period of time. 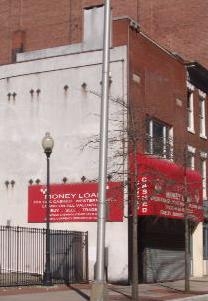 Small buildings were often constructed on these lots.Many were cheaply built as they were considered only short-term, temporary structures. The buildings were planned so that the rents from the tenants would cover the property taxes.Many of the taxpayers started out as one-story buildings and often contained one or more retail shops at street level. Later an upper floor or two was added for resident tenants, although some were constructed as two or three story buildings.

A majority of these buildings, solely built with the intent that something bigger and better would replace it, were built from about the end of the 1800s until about the late 1940s. Now, some 60 or more years later, the original purpose of these buildings is just about forgotten and many have been swallowed up by the expanding metropolis. Now, the term “taxpayer” is usually applied to any modest building in a large city that contains a commercial/retail business in the first floor and living quarters in the upper floors.