I recently blogged about the Cincinnati Preservation Association’s offer to restore the historic Gamble House and how it was rejected by the Foundation that owns the old house. The Foundation considered the offer to be unfeasible, and one of the reasons given was that the home’s foundation was sinking. The more I have thought about that reasoning, the more aggravated I’ve become.

I grew up in an area that was and still is full of old houses built in the 1700s and 1800s. Many of those homes were built with stacked stone foundations and sometimes the foundations were parged with a concrete mixture and sometimes they weren’t. The same thing was true about the concrete footings under the homes. If they were there at all, they were usually not deep enough, or they were sized incorrectly according to modern standards. 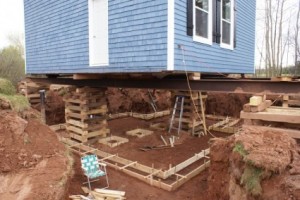 New Foundation for an Old House from whimfield.com

The result was that when you were in the homes, it wasn’t uncommon to notice that the floors were sloping. No one was too concerned as it seemed to give the old houses “character,” and I think some homeowners actually considered the uneven floors to be a certificate of authenticity for the age of their homes.

Occasionally there was an old house with floors so bad you felt you had to brace yourself when crossing a room to keep from sliding downhill. When I got into construction, I was involved in correcting a few old houses with this problem, and it could often be done with jacks and timbers. If there was a basement of sorts, we were in good shape, but if we just had a crawl space to work in, we often had sore backs and moments of extreme excitement as we met new friends from the animal kingdom. Some foundations could be modernized and repaired while others had to be replaced completely.

I realize the Gamble House is probably much larger than anything I worked on and a much larger operation than the new foundations for these old houses in California and Tennessee, but as the old adage states: “Where there’s a will, there’s a way.” I think the problem in Cincinnati is that the Foundation that owns the old house doesn’t have the “will,” and they don’t want anyone else to have one either.

A recent article in the New York Times makes the point that correcting home foundations might soon be more than just an old house problem. Evidently changes in the climate are causing soils to shift and even recently built homes are beginning to have sloped floors. Unfortunately, it’s a stretch to say that the problem is giving new homes that old house “character.”