We looked at a home this weekend and were wondering what style it is.  The agent called it a two-story Colonial, but it’s listed as less than 100 years old.  It has a rear one-story addition, but the original house looks like a big square box with a pyramid for a roof.  The front porch looks original.  It’s very large with square columns supporting the porch roof.  If you have any info on this type of house, we would appreciate it.

I’m frequently presented with opportunities to tease some real estate sales folks about their knowledge of architectural terms and styles. Any home that is two stories and is somewhat lacking in decorative elements is usually listed as a Colonial. The home you describe has some splendid details that are consistent with a unique type of family home that was most popular during the first third of the 20th century. 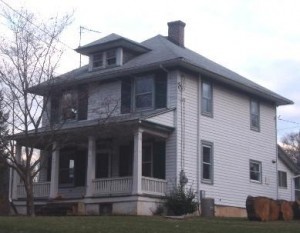 The American Foursquare appears throughout the U.S. in mostly urban neighborhoods.  That’s not to say that you won’t find them in rural areas–some are even farmhouses. A large majority were built between 1895 and the late 1930s. I call it a type of house rather than a particular style.  The basic form of the structure of the house classifies it as an American Foursquare. The style used on the other details can vary greatly.

The Form
The homes are usually two-stories. There is a large attic that when finished, the home could be considered a 2½ story. They were commonly built with the top few feet of the basement walls extending up out of the ground, creating a tall, boxy home on the lot. A steep-sloped hipped roof creates the large attic. The roof has a very short ridge, while others have no ridge, resulting in a pyramidal roof. There is almost always a dormer window, centered on the front slope.

The early models might have a box bay or angle bay extension on one side. Occasionally a bay pops out of the front of the second floor. I don’t think I’ve never seen a Foursquare without a covered front porch.

I find very few that have had major structural changes from the original floor plan, proving the original design to still be functional for today’s modest families. The most common changes are a rear one story addition–to accommodate a larger eat-in kitchen–and finishing the attic into an office, studio, or bedroom.

The Details
The Foursquare has been built with every building material available at that time. Masonry–brick, stone, concrete block, and structural terra cotta, was easily used to create the square-box exterior walls. Wood frame was also used for many and exterior wall covering choices at the time were plentiful. Unfortunately, most wood constructed models are now encapsulated with modern vinyl or aluminum siding.

Some early homes had a few decorative details left over from the Victorian period, but much less extravagant. Some followed the Colonial Revival style and included a symmetrical facade.  Many style details were saved only for the prominent front porch. Later Foursquare styles were influenced by the details of the Prairie, Craftsman, Mission, Arts and Crafts styles and interiors began looking similar to bungalows.

Still Strong
The American Foursquare was considered a practical, economic type of house. Its simple form was easily constructed, is easily maintained and the interiors maximized usable spaces. I think the observation that so few have been significantly altered shows that this type of structure may be one of the most sensible and livable since the early “Colonial” homes.