The Arthur Raycraft House: Finding Old House Inspiration in the Middle of Nowhere

Part of the charm part of old West mining boomtowns like Tonopah, Nevada where I live, is that there are plenty of old and interesting places that can inspire you on your own old house projects. 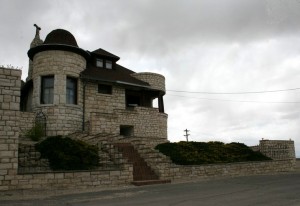 The Arthur Raycraft house, built in 1906 and listed on the National Register of Historic Places, is one of several houses in town that has been the dream house of just about every kid who has lived in Tonopah during the last century. As kids, we all called it The Castle House. The historic property survey on file is a little more detailed: “The addition of the two Queen Anne Style turrets on opposing ends of the front facade provides a unique adaptation of Victorian elements, applied to a basic Neo-Colonial building format.”

In 1998, Joni and Dennis Eastley purchased the house from the Pillers family and restored it. Actually, Joni and Dennis handled the renovations in a way that would make any old house enthusiast weep with joy; Joni didn’t do a single thing to the house without consulting a historian or architecture preservationist, “I’m really a purist–I want things the way they looked before.” 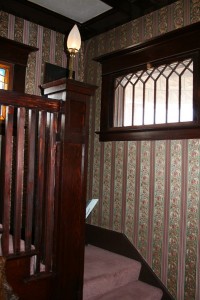 This original newel post was once hacked by renters who burned the rest of the banister to keep warm during winter.

The Eastleys had no old photos to use, which became a challenge when trying to reconstruct the stair banister near the front entryway. Why did the banister need to be constructed? Because some renters around the 1930s took a hatchet (yes, a hatchet) and chopped up the banister and an original window seat in the parlor and burned the wood to stay warm. The newel post, which was about eight inches in width and solid wood, was too thick to chop up (or the renters were just too lazy).

The Pillers kept that hacked-up newel post in the basement all those years, so Joni and Dennis used that post with an awful lot of putty, an understanding of craftsman style, the help of a historian, and the shape and size of holes from the other posts to reconstruct the banister. 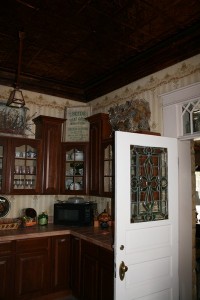 The Kitchen, with a Stamped Copper Ceiling

The same detail has gone into all the interior renovations. Joni found an original period stamp and bought sheets of copper to construct the kitchen’s ceiling. For the crown molding and other trim throughout the house, the Eastleys found reclaimed wood from a company in Sacramento. Everything in the house has a story; Joni was even able to salvage a door from one of Tonopah’s other historic properties that burned down in the 1990s. She keeps a notebook where she lists the original home of each chandelier, piece of stained glass, and furniture.

Just as much care has gone into the restoration and preservation of the home’s exterior. The lower turret was falling apart from overgrown honeysuckle, so Dennis went to other local property owners and bartered for similar reclaimed rock. Joni discreetly told me that she and Dennis have put money equal to the purchase price into the exterior of the home (and of course I looked that up in the assessor’s records–$145,000!). 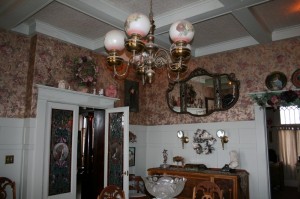 The house hasn’t been without challenges. On February 1, 1999 during the renovation, the oil furnace went out. On February 2, a fire started because the space heaters overheated the knob and tube wiring. That meant on February 3, all the pipes in the house froze and burst. The electrical alone was an extra $10,000 that the Eastleys hadn’t planned for. Joni said, “It’s like the house keeps punishing us for loving it.” 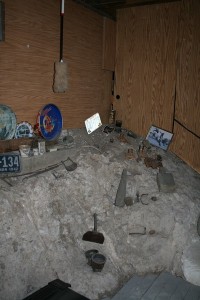 The Mountain in the Basement

Despite the challenges, they have pushed on and have plans to complete the restoration by finishing the basement, which currently is occupied by a large portion of mountain, and to landscape the property. Neither Joni nor Dennis want to live anywhere else the rest of their lives, and that really is inspiring.