The Castle Built From Asbestos

Driving north, on the Old Bethlehem Pike from Philadelphia, one passes through a portion of the 19th century town of Ambler, PA. On the right, set well back from the road, just visible in a clearing between trees, is an amazing 3-story, 24-room castle, with crenelated towers rising even higher. This was built in the last quarter of the 19th century on a 400 acre property by Dr. Richard Mattison, who named his estate Lindenwold. 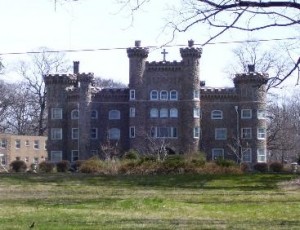 The castle, built to resemble England’s Windsor, is now home to St. Mary’s Villa for Children and Families. It’s not really built out of asbestos, but it was possible because of Dr. Mattison’s discovery and subsequent fortune built on asbestos products.

Keasbey & Mattison
Dr. Mattison, a chemist, and Henry Keasbey, a financier, formed the Keasbey & Mattison Company that originally produced pharmaceuticals.  Dr. Mattison discovered that magnesium carbonate would stick to a hot steel pipe. Adding asbestos fibers created excellent insulation for steam pipes. Steam, at the time, was piped to heat homes and other buildings and was used extensively in manufacturing. From that point on, Keasbey & Mattison Company focused exclusively on the manufacture of numerous asbestos building and industrial materials.

Dr. Mattison transformed the little 18th century mill town into a thriving industrial town. He built 400 homes in Ambler–fine homes for his company execs and more moderate homes for managers and workers.   He was also responsible for civic improvements, a church, library, and opera house.

The Town Today
Ambler is still quite nice. There’s at least 80 percent of its 18th and 19th century buildings still occupied. The homes, stores, and other buildings are mostly still in fine shape. As a close suburb of Philadelphia, with a railroad and now highways, the town continued to thrive after its major industry folded. There’s still some abandoned asbestos production buildings and a huge asbestos waste pile at the west end of the town that perpetually pops up in the media. Here’s a sign on the fence dividing a playground from the pile: 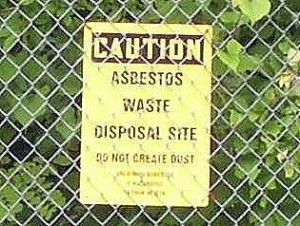