The Front Porch in America

I know most of the very earliest homes were without one, but many had wide eaves or a pent-roof to deflect rain and provide shade over windows and the entrance door. Nobody had leisure time to sit around on the porch anyway. Most sport one now as a later “update”. In the South, the verandah made an early appearance and then doubled the levels as homes grew vertically.

When the Federal style (the first truly American style) appeared, many homes had rectangular or semi-circular porticos. Then, many Greek revivals, all the Italianates, Gothic revivals and Second Empires had one. Later Victorian styles wouldn’t be caught without one and often took them to the extreme. Early 20th century homes still carried on the front porch tradition and it was at this time that they seemed to peak as the most popular as a family gathering space during the milder seasons. 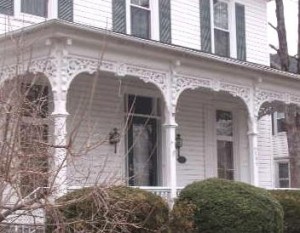 It seems that when the mass production of homes began, shortly after the second world war, architects began omitting the front porch from their designs of modest homes. It might not have been their choice, but an instruction from the developers to reduce costs. In the past 15 years, in the style that we lovingly call the McMansion, front porches are very often excluded. I think I know why. It would obscure the ridiculously large surface area of glass, above and beside the front entrance and its only purpose is to show off a complete waste of interior space – the pretentious foyer. The type that extend from the first floor to the attic, showing a prefab “grand staircase” and 4 figure chandelier, that’s left on all evening, to display this garish space to passers-by, well into the night.

Instead of a protective cover over the main entrance, these homeowners are cursed with constant leaks around the oversized, improperly installed windows and sidelights and driving rains entering around the edges of the door, warping their laminated flooring. I know, because we get the frequent calls from these owners to determine the source of the leak. We usually find they’ve had half a dozen call-backs from the builder, who’s only remedy is to send a kid out to smear caulk where it’s already been caulked (and where it’s not supposed to be caulked in the first place). 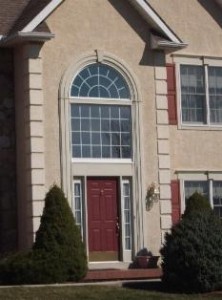 The old house porches seem to me to extend the family home out into the community. The folks in the porch-less McMansions of today often don’t even know the names of their neighbors, even though the homes are jammed together in a cul-de-sac. On a warm sunny day, they’re probably in seclusion behind their oversized home on their heliport sized deck, cooking propane flavored salmon. Their only interaction with any community is via their cell phone.