The historic thrill of row houses

In the midst of so many stories of demolition of old houses, it is always refreshing to learn of a new victory for preservation. It is especially sweet when that victory comes for a large historic area. 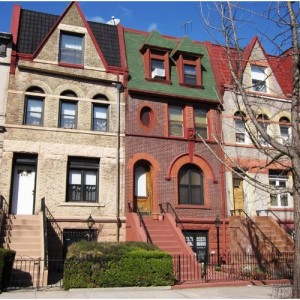 Yesterday, the New York City Landmark Preservation Commission approved a new historic district in Brooklyn Heights. Most of the 610 historic row houses, apartment buildings, and Queen Anne homes in the Crown Heights North II Historic District were built between 1870 and 1920. The approval comes four years after a landmark designation for a section of 472 buildings right next to the newly approved section. There is a third section of comparable size currently being considered for the designation.

Those who pushed for the designation point out that property values in the area will increase, and the homes will be protected from major development. Opponents say the new designation makes it very difficult for landlords to provide upkeep for their homes, limits renovation, and can lead to increased rent in the area.

There are some naysayers who believe there are plenty of row houses currently preserved, and that several economically-depressed areas could benefit from razing the old row houses to make way for new developments. However, when row houses are properly preserved and restored, they offer not only a glimpse of history but a comfortable, convenient living space very close to the amenities of a large downtown. Row houses were initially built as cheap accommodations for workers who needed easy access to their businesses, which is why so many row houses are centered around old factories and active waterfronts.

When I first visited a historic row house in Philadelphia, I was thrilled by how much living space was compacted into the four stories, as well as the proximity to all the necessities of city life, such as train stations and grocery stores. The mid-size row house, called the Double Trinity or London House, often had a large yard in the back, a perfect space of green in the middle of the city. There is a surprising amount of space in a mid-size house–up to 1,800 square feet.

The larger row houses, usually known as a Federal or Georgian Town House, can reach up to 7,000 square feet or more. The most surprising part of the larger row houses is the amount of light that floods the space. By their nature, row houses have few windows. Making the most of that space with larger windows, skylights and offset rooms can turn a rather dark home into one that dazzles with light.

Roof decks and roof gardens are amenities that still require a permit, but they are usually worth the hassle. To keep up with modern times, some historic row houses have carriage bays that have been converted to modern garages. These are often in the back of the building, hidden away by narrow alleys, to further preserve the beauty of the facade. Inside the house, plaster ceilings and other architectural details are often well-preserved, attesting to the longevity of the materials and the preservation mindset of the owner.

Row houses hold a chapter of our history, and deserve to be preserved. Each new neighborhood or old houses that is protected is another step closer to not only remembering our history, but revitalizing it to be enjoyed by a new generation.