The History of Coal Heating

Brett recently wrote about biomass stoves and furnaces, and before that Scott weighed in on the pros and cons of pellet stoves. So I thought I’d provide a little background on the fossil fuel that preceded these newfangled methods of heating your home.

Coal Heating: When Was It Common?

When inspecting old buildings, there’s often some evidence that it was heated with coal at one time. Even really old buildings, originally heated with wood, may have had a central coal heating retrofit. Old wood burning fireplaces may have been blocked off and coal stoves had been piped into the old chimney flues. Some buildings still have their original coal fired boiler or furnace, but it has been converted to fuel oil or gas. In many 19th century homes, an old abandoned chimney used to serve a coal cooking range in the original kitchen. Many basements still have their coal bin. 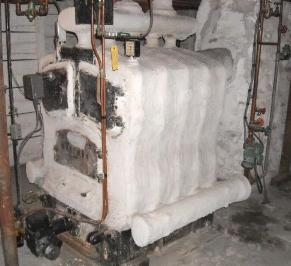 I like to point out these clues to an earlier time but then I’m frequently asked during what time period was the house heated with coal. I then have to politely point out that I wasn’t around back then.

I’m the old-house inspector, not the old house-inspector.

As a collector of old books I get to read about building materials and methods, and have a pretty good idea when coal-fired heating equipment became available. This doesn’t necessarily correspond with when coal as a fuel became readily available to a specific area. In colonial America, wood was certainly abundant and to some degree, considered a waste product. In fact, I once read that black walnut was undesirable and used for things like temporary fencing. Until a region became deforested, like many areas of Europe, wood would remain the fuel for heating.

As early as 1748, there was a coal mine near Richmond, VA, but the coal would likely only have been used very locally until the transportation industry developed. By the 1820s, coal was being shipped regularly from Europe to some major coastal American cities, but the cost for overseas transport likely limited the use to only large buildings or homes of the most wealthy. Numerous canals were created by the 1840s, enabling America’s land-locked coal industries the ability to distribute this fossil fuels to many ports, cities, and towns. Horse powered wagons could then provide the local delivery from coal yards to all but the most remote rural homes.

The second half of the 19th century and into the first quarter of the 20th saw coal as the most abundant fuel most widely used–not only for heating but for powering most industrial processes.  The First World War created major shortages of coal and its use peaked right before 1920. By the mid 1930s, fuel oil burners finally became safe and reliable. By the beginning of the building boom right after the Second World War, coal for heating was seen as old technology.