Italianate is considered a style from the “picturesque movement”, a departure from the preceding classical styles of architecture.  As far as I can tell, the style came from Great Britain, not Italy.  It’s details though, are based on the 16th century Italian Villas of the wealthiest class.   In America, there were some built in the 1840s, but Italianate houses were predominately built here between 1850 and 1890.

The most common details that define the Italianate style, include roofs with wide overhanging eaves.  Large, sometimes paired, decorative brackets appear to support the wide overhang.  Front porches and porticos are common, usually with low, almost flat roofs that almost always have the same decorative eave brackets.  Unfortunately, many Italianates have lost their brackets, due to lack of maintenance, or they were hacked off to make it easier to install aluminum capping. 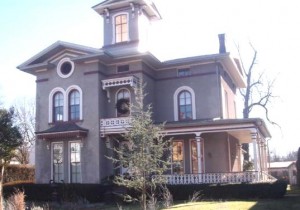 The windows are often tall and narrow.  Many have arched or curved tops.  Since glassmaking technology now allowed for larger panes, 2 over 2 light windows were becoming more common. Decorative, projecting hoods often cap the windows, like a crown.  The main entry doors are often pared, with thick decorative raised panels.  Some have arched top glass in the upper half.

The form of the Italianate varies as it seems that the above details defined the style.  A rectangular shape is the most common, followed by square.  They tend to be tall and narrow, partially due to high ceilings.  Some have a square cupola or tower.  Roofs tend to be lower pitched than previous styles, but there are some with extremely steep gable roofs.  Angle bay extensions, with flat roofs, are also common.

Since this style was being constructed well after the start of the industrial revolution, many of the applied architectural details were mass produced.  These were distributed widely, thanks to the railroad network.  Some of the decorative elements on a Denver mansion of a very wealthy family could be identical to those on a Pittsburgh factory worker’s rowhome.  It’s not unusual to find that an older building was “updated” by having a handful of Italianate details applied.