Some houses are owned by legends. Then there are the houses that become legends in their own right. The gorgeous Biltmore estate in Asheville, NC is an example of a house that became larger than life. Fallingwater, designed by Frank Lloyd Wright, is another.

Some houses have a quiet fame that is attached to their owners. One of those is the “Lake House,” once owned by Johnny Cash. Cash was first a country music icon and later, an icon that transcended all genres of music. From classic hits like “I Walk the Line” and “Folsom Prison Blues” to more modern masterpieces like “Hurt,” Johnny Cash could turn a simple song into an almost religious experience.

So it is no surprise that his beloved Lake House had a mystique all its own. 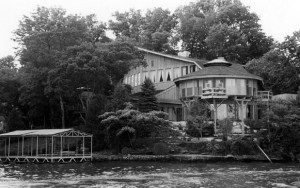 The house that became a legend

Cash fell in love with the house the moment he saw it. Builder Braxton Dixon was erecting the beautiful structure as a home for his own family, but Cash worked hard to convince Dixon to sell it. The builder finally agreed. Cash took up residence in 1968, shortly after his marriage to June Carter Cash.

The 14,000 square foot Tennessee home had wide windows that overlooked Old Hickory Lake, round rooms that were 35 feet across, seven bedrooms and gardens that stretched across the property. The house was filled with stone, marble and reclaimed wood salvaged from old barns. There was never an original blueprint–instead, the builder just did what felt right at the time, and the house took on a form all its own.

Over time, the legend grew. The Cash family hosted musicians of every stripe and style, dignitaries from all over the world and even a President or two. It became a place where great music was born. But it wasn’t closed off from the world–this was the kind of place where fans could stop to say hello.

Even after June’s death in 2003 and Johnny’s death four months later, the mystique of the house lived on. Photographs from that time show a house that was in need of a serious remodel–a good cabinet refacing would have been in order and maybe a bathroom overhaul, as well as replacement windows for those sides of the house that had faced lake-fueled storms for decades. But the rooms were just as majestic and the view just as breathtaking.

It was sold to singer Barry Gibbs in 2006, and was in the midst of renovation when the unthinkable happened: a spark ignited flammable preservatives being used on the outside of the house, and it went up in flames. The Lake House burned to the ground.

But this was not the only tragedy to take place on the lakefront. Roy Orbison once owned a home right next to the Lake House. It burned down, killing two of his three sons. Shortly after the deaths, Cash bought the property from Orbison with the promise, “Only good shall grow on this land.” The Cash family planted fruit trees and cultivated an orchard on the spot.

A little further down the road once stood the home of Cash’s first guitarist, Luther Perkins. An accidental fire burned his home to the ground. Perkins eventually died of burns sustained in the fire.

The fire at the Lake House wrought such complete destruction that many in the country music industry said it was almost as though the flames had come from beyond the grave–that it was meant to be that only the Cash family would ever live in their beloved house. Though Gibbs still owns the property, he has no plans to rebuild on it. Today, the lot sits vacant, a quiet space overgrown by the gardens that the family loved.