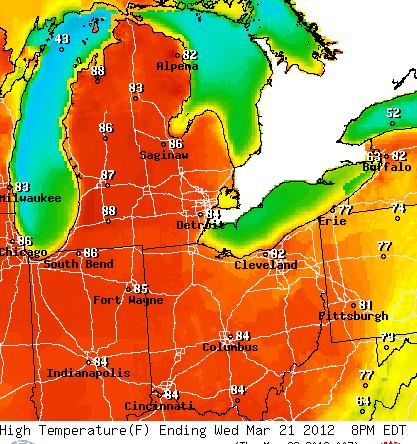 Here are three numbers regarding Ann Arbor, Michigan for March 20, the official last day of winter: 43ºF, 63ºF and 81ºF.

43ºF is the average/normal high temperature.

63ºF was the previous record high temperature set in 2003. Incidentally, 2003 was the fourth hottest year on record.

81ºF was the temperature yesterday at 5:12 p.m. This number is nearly double the Ann Arbor average temperature, 38º above normal.

“Weird weather?” There is no term that appropriately describes the record-shattering temperature numbers we are seeing around the globe. Last Thursday, five days before the end of winter, the earliest E3 tornado ever recorded in Michigan hit the town of Dexter. The tornado was a half mile wide.

We know from the Wizard of Oz that a tornado can lift a house and occasionally drop it on a wicked witch. But, is it possible for our homes to cause tornadoes?

Here is the reality: there are 130 million existing homes in the U.S. and they are responsible for nearly a quarter of our nation’s greenhouse gas emissions. The other 75% of emissions is, broadly speaking, to make, grow and ship stuff to support our lives at home.

Throughout the evolutionary history of humanity we have enjoyed a relatively stable climate. However, we are rapidly changing the composition of our atmosphere. As carbon dioxide rises so does temperature.  As temperature rises, so do extreme weather events.

This is the level above which is “too high to maintain the climate to which humanity, wildlife, and the rest of the biosphere are adapted.”

This is the current level of CO2. This number has been skyrocketing for the past fifty years. The last time CO2 levels were 392 ppm sea level was at least 50 feet higher than today.

In his latest book At Home, Bill Bryson writes that “the greatest possible irony would be if in our endless quest to fill our lives with comfort and happiness we created a world that had neither.”

If we choose to redefine home, walk more, bike more, spend more time with family and friends, shop locally, grow our own gardens, honor historic neighborhoods, really get to know our neighbors, and nurture our lives in our communities we will undoubtedly experience greater joy . . . no matter what the weather.

Matt Grocoff, Esq. LEED is honored with the 2012 Michigan Green Leader Award and is founder of Thrive - Net Zero Energy Consulting Collaborative, host of Greenovation.TV, a contributor to The Environment Report on Public Radio, the green renovation expert for Old House Web, and a sought after lecturer. His home is America’s oldest net-zero energy home and was called “Sustainable Perfection” by The Atlantic, and honored as one of USA Today’s seven “Best Green Homes of 2010″ and Preservation Project of the Year.  He has been featured in hundreds of publications and news shows.  Join him on Google+, Twitter and Facebook