No doubt you’ve heard about the children’s game of Bloody Mary, which requires you to look into a mirror in the dark and call for the ghost three times. In 1990, some kids and I left a Halloween party to go to the Mizpah and investigate the fifth floor with the goal of calling the hotel’s resident ghost, the Lady in Red. We got as far as the top step when we saw what we were sure were blood stains on the carpet and witnessed the fire door suddenly buckle inward. We shrieked and ran. That was the only time I was ever on the Mizpah’s top floor. I also never attempted to play Bloody Mary ever again. The fact that I’ve now typed it twice is enough cause for alarm.

But many, many other people over the years have stayed in the Mizpah and encountered its favorite phantom, though not as many as you would think since the historical restorations that should have put the Mizpah back on the map. 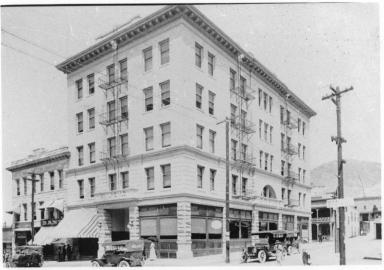 Mizpah Hotel, 1912, photo courtesy of the the Central Nevada Historical Society in Tonopah, Nevada, home of the "Best Museum in Rural Nevada, 2010"

The Mizpah was “the finest stone hotel on the desert,” said the local paper announcing the opening in November 1908 in Tonopah, Nevada. The five-story hotel cost over $200,000 to build. The hotel changed hands quite a few times until Frank Scott of Las Vegas (who also had the Union Plaza hotel) bought it in 1979 with an eye for historical restoration. He was quoted as saying, “It’s a labor of love, and I think it will be great for the state of Nevada…there’s an awful lot of history we’re going to pull out and expose to the public, because it’s almost been lost–and probably would have been lost if someone hadn’t done something about it.”

Scott wanted to restore the hotel, but he also wanted it to have “all the modern conveniences.” He used original photographs to guide the restoration. Some of the hotel’s original rooms only offered a bed and a wash basin and guests shared the bathroom down the hall. These rooms were turned into elevator lobbies. Some antiques were kept. The old-fashioned claw foot bathtubs were resurfaced with porcelain and the feet were re-bronzed. The mosaic ceramic tile floors were restored and original paneling was refinished. The original Victorian motif was also kept. In all, the work took 2.5 years and cost almost $4 million.

The renovations were good for business–almost as good as the ghost stories. Sales paraphernalia for the hotel states: “… Hundreds, if not thousands, of people have stayed at the Mizpah expressly to find the Lady in Red, even holding séances.” As a little girl, I spent a lot of time at the Mizpah with my grandma who ate breakfast there every single day. I don’t remember at what point I heard about the Lady in Red, but I knew about her as a child. The version of the story I heard is that a woman employed as a prostitute was brutally stabbed on the fifth floor (the top floor, sometimes called the sixth depending on if you count the below-ground level as 1). There’s also another version involving strangulation. This particular ghost was said to be mischievous, doing things such as lighting up the old Keno board and moving guests’ items, but has appeared in front of guests and passed through walls.

I recently read a different version of the story. Heidi Bertolino was a reporter who researched and wrote an in-depth series of articles on the Mizpah in 2002. When researching the Lady in Red, Bertolino received a postcard asking her not to dig too deep as fallout from the real story could damage the lives of people still living in Tonopah today. The Lady in Red, said the card, was a mother of three who followed a married man to Tonopah and reportedly died of a broken heart in 1903 on that property. Before the hotel was built, that was site of the Mizpah saloon, the first permanent structure in Tonopah. Having had my share of broken hearts, I firmly believe the town saloon is as good a place as any to find comfort. 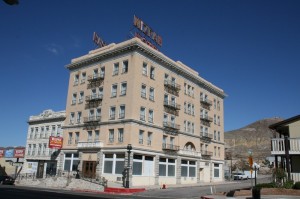 Despite the friendly ghost, great highway location, history, renovations, and character, the Mizpah has been closed for more than a decade. In 1985, then-owner Bill Allison had issued 753 bad checks and owed the IRS $110,000. The Nevada Gaming Control Board shut down the casino. “This is a sad chapter for a property that has made a big comeback,” publish the Reno Gazette Journal on Nov. 14, 1985.

The Mizpah operated for a while without a casino and for some time with a leased casino, but it has yet to recover. A for sale sign is still tacked up, and when I called, the property is still being shown. Twenty-five years since the casino was closed, we have yet to see if it’s only a sad chapter or a truly a tragic ending.