The Pink Hammer Revolution: Ms. Fix-It is on the Rise

In what Kay Hymowitz refers to as “the pinking of home improvement,” women are picking up hammers and drills in increasing numbers. But this isn’t exactly breaking news. Around 2005, the Home Depot, along with other hardware stores, began targeting women customers with programs like the Do-It-Herself home improvement workshop for women. In a recent survey conducted by Lowes, 9 out of 10 single women said they feel comfortable using a power tool, and 77% said they own one. Home Depot claims that these days 55 percent of its non-contractor customers are women. Why? There are several reasons, but one cited by Lowe’s spokeswoman Chris Ahearn is the abundance of information on the Internet.

Circumstances have changed as well. Many women are waiting until their 30s or 40s to marry, if they chose to at all. But they often are not waiting for a ring before they commit to a house or condo. In 1995, single women made up 15% of the United State’s real estate market. That number jumped to 22% in 2006, the last year for which data is available. But how many of these women are willing to tackle full on old house restorations?

A class called Old House Maintenance for Women is being offered next month in Missouri. The instructor Bob Yapp, an expert in hands-on preservation who has been involved in the restoration or rehabilitation of over 160 historic properties, has said “Too often in our society fathers tend to spend more time teaching their sons how to think in a so-called ‘handy’ way. This is really unfortunate. In truth, when women are given the opportunity to learn this way of thinking, their skills almost always exceed men’s.”

I’m not sure what kind of scientific evidence Bob would be able to dig up to support this, but the fact of the matter is, women are just as well equip to tackle the majority of home renovation projects as men are. 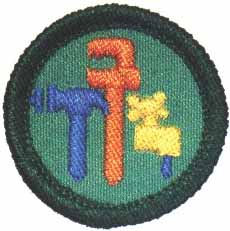 And these days, females are starting to refine their home improvement skills at an early age. The Girl Scouts now offer a Ms. Fix-It badge. According to the Troop 3262 Badge pages, the number one task required (out of a total of 6) to earn this badge is to “do at least two home repairs at home … fix a toilet, patch a wall or floor, fix loose screws or knobs on doors or cabinets, paint a wall, or help refinish furniture.”

There are others who suggest that the growing trend of Do-it-Herselfers is a result of forces other than resourcefulness or necessity.  In the book, Why We Buy, Paco Underhill notes that in Kmart, because of the increase in women’s involvement and interest in home improvements, cans of paint from the Martha Stewart collection are often featured at the front of the store, instead of where paint used to be. Underhill suggests that paint has gone from being hardware, to fashion.

Whether a women is motivated to renovate because it’s fashionable, necessary, challenging, or simply enjoyable, varies from woman to woman, but these days one thing is certain: there is a lot of support out there for the Ms. Fix-It. From a growing number of websites — including this one, and the very helpful Old House Forums — to a slew of female-focused books. A couple of which are listed below. 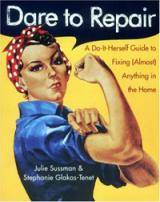 Julie Sussman and Stephanie Glakas-Tenet, both wives of CIA employees (yes, that’s Mrs. George Tenet), who weren’t often around to help with household problems, show women how to make the most common repairs, like fixing clogged drains and toilets, replacing electrical switches and outlets, unsticking windows, and more. 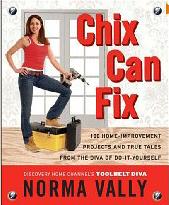 The star of the Discovery Channel’s “Tool-Belt Diva”, Norma Vally (is this her real name? Sounds like a heroine in a Danielle Steel potboiler) includes stories to introduce each chapter and writes plain instructions for each project that you want to tackle. Some critics claim she oversimplifies or insults her readers’ intelligence, but she seems to have enough supporters that feel the opposite.