The Politics of Preservation

Oftentimes those of us who write on this ol’ blog skirt the issue of politics now and again. It’s somehow unavoidable. Why? Well, here is a short list of the reasons that you can probably add to that is going to lead me to my point: 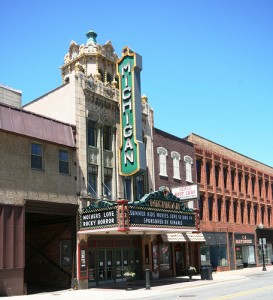 Michigan Theatre in Jackson, MI, is being restored and renovated by a local non-profit corporation that acquired the building in 1993. The group aims to make this historical theater a major attraction for the entire region.

It took a while for me to get to point 5, but I’d didn’t want to lose you if I busted out with “federal politicians” from the get-go because politicians aren’t very popular these days. I stumbled upon one who seems to be looking to 2011 with a few preservation projects on board. That guy is Congressman Mark Schauer of Michigan. I don’t know Mark. I’m from Nevada, so I definitely didn’t vote for Mark. I’ve only been to Michigan once when I was 16 and I have to say I was more impressed with the fireflies than with politicians or historic preservation efforts. In short, there’s no way this is a political endorsement.

Schauer recently published his priority projects for 2011 for the appropriations process for 2011. On his website, he described the process by which his team surveyed organizations throughout the state to get input. The result is a list that includes the following:

Schauer’s list brought home a really important point for me that I’d like to share with you: Though we can often wistfully think that the endangered historical properties in our own states may be rescued by government funds, preservation efforts take planning and can’t always be last-minute game changers. Though I’m still in recovery from the campaign season (and television ads), I best figure out what my state’s representatives are considering priority projects for 2011 and if any of those projects include preservation.